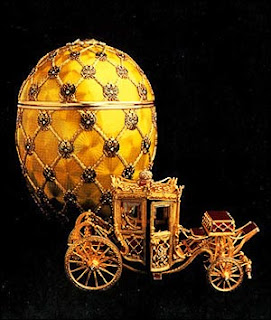 There seems to be an interesting karmic juxtaposition in my life right now, one that involves the history of California, especially it's egg farms and immigrant history; a history which strongly influenced both the early hippies and a good many Pagans, if they would but know it. Add to that mix, old lovers, diamonds, Jewish law firms, and gay marriage.

I'm chatting with an old flame on the phone: We were together through much of college and grad school and after we parted, he went on to become quite successful in his chosen field. We reconnected four years ago after many years of silence between us. (It happens when you love each other for a long time but realize in the end that you both want very different things.) (1) Our renewal of friendship these many years later has been a grace note in my life. I've known very few people as gifted and powerful as he is now who are also good human beings. As things happened, we reconnected just before his sister became ill and eventually died of cancer, as mine had done some years before. Both of our sisters were addicts and alcoholics. Both got clean and sober before they died. Both needed our help to stay that way so they could find a good death and be ready for whatever comes next. If you've ever been glad to pay off a karmic debt to someone you'll know what I mean when I say that this reconnection and mutual support has been a source of healing for us both.

That night we were taking about his kids. I've never wanted children of my own, and I've never regretted that choice, but I'm very glad that he was able to have a family. Unlike his own dad, he is a very involved and loving father. Something in the conversational air - you may call it chance, I call it Goddess - caused me to ask about the child of another attorney and his wife, people I knew when I lived in Los Angeles. I remembered this couple fondly, in part because the woman was a teacher and one of the few people connected to The Firm who could talk about books and culture at all those legal dinners and cocktail parties, where I, a eco-feminist with a lit degree was very much a fish out of water. The boy's father was one of those "brain the size of a planet" folks who still managed to be humble, considerate and kind. (2) They were, as I remember, very good parents. That's not an easy thing to be when your prestige law firm requires you to work ungodly hours. The Firm had, as I remember, two unspoken tracks for women lawyers and since this was the early 80's they had precious few of those. One track let you have a reasonable work schedule and time with your family. The other allowed you to make partner. Your call. (3).

Support groups are filled with the children of this workaholic culture, many of whom have the infamous "hole in their soul" where a parent should be. But not, it seems, in this case. The little boy I remember so fondly is now a fine young man, and a lawyer himself. He and his partner recently got married or as married as you can be when you are gay and live in these United States. At their wedding they asked friends and family not to give gifts but to donate funds to support the fight against Proposition 8, which would deny the rights of gay and lesbians to marry. I haven't seen him since he was a child, but I must say, I'm glad to hear that he turned out so well.

The Pagan Sphinx has a post about Proposition 8 and the fight for gay marriage rights in this country. She writes:

Right now, the other side is out-raising us by a wide margin. Soon, their ads – undoubtedly filled with lies and distortions about Prop 8, about us and about our families – will be on the air. Our ads will tell the real story — how real families will be affected if Prop 8 passes. Their ads won’t.

Currently, both Presidential candidates argue that "marriage is between a man and a woman". One supposes that they could not get elected if they did otherwise. Let us hope they open their hearts and minds.

I plan to keep an eye on this issue and on the fate of Proposition 2 in my old state, where farming is both personal and political. This proposition addresses cruelty in the caging of farm animals. We need to change the way chickens and other farm animals are treated in this country. The SF Chronicle writes:

The measure comes at a time when animal rights issues have grabbed the national spotlight, and the consumer demand for cage-free eggs has captured the attention of national chain stores and fast-food restaurants.

Supporters say not only will laying hens have healthier lives if they are raised in chicken houses where they are free to roam the floor, but the price of cage-free eggs will go down. Currently 5 to 8 percent of the eggs produced in the state come from cage-free chickens. California is responsible for about 6 percent of all the nation's table eggs, a $330 million industry in 2007.

Florida, Arizona, Colorado and Oregon have passed similar laws involving rights for swine and veal. But California's referendum is the first to demand that all egg-producing chickens in the state be cage free.

If this issue is important to you, look for organic, cage-free eggs when you go to the grocery store. Your body - and perhaps your karma - will be all the better for it.

(1) He wanted to get married, stay in L.A. and have kids. I did not. Eventually, both of us went on to find the lifestyles that suited us and we each choose partners based on heart-sense and shared values as well as attraction and romance. Perhaps we had learned something from our time together that helped us make different choices the next time love was offered - I like to think so,

(2) He was such an interesting guy. Among other things, he had clerked for a Supreme Court judge right out of law school, and worked his way through Harvard by working for Jewish diamond merchants. His stories open my eyes to a closed and little known world and I credit these stories for my life-long interest in the history of jewelry making, gems and semi-precious stones. To this day, while I admire ancient and antique jewelry (and have attended gem and jewelry exhibits all over the world), I have always refused to own or wear diamonds. The cost is, quite literally, too high.

This particular law firm began because two Jewish lawyers could not get work in the traditional white shoe law firms of the 50's and 60's. It was an interesting mix of high minded social politics and fiscal conservatism. Most of the attorneys I met there were Republicans, which they saw as the "responsible" party when it came to matters of money and the economy. (Ironic, no?) In those days, my friend was one of the few Christians hired at this firm. Having lived a privileged WASP existence before that point (I would say it was charmed but not rich, he had to work his way through college and grad school just like the rest of us) he experienced for the first time what it was like to be a minority. A life long Republican (something that was the cause of some heated conversations between the two of us for many years) he will now be voting for Obama.

(3) My friend is now a senior partner and he has worked to change that. He admits, though, that while he is admired for being a dedicated father when he takes time off to coach or attend to his two son's sports events or takes family vacations, if a woman in this same law firm (and there are more of them now, thanks to him) does the same thing, she is still seen by the other attorneys there as "not quite committed to the team."

Photo: Diamond encrusted Faberge Egg and gold carriage from the Russian Gifts and Souvenirs website. These little eggs have a fascinating history, which you can read about at their website.

Gay Weddings: What to Expect?

Hate Crimes Towards the Other

Shumei Natural Agriculture
Posted by Dj Connell at 9:59 AM