When is a Kiss Not Just a Kiss? 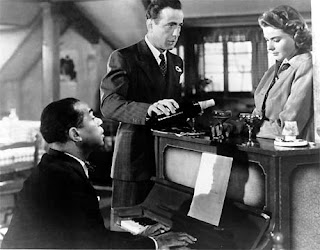 You must remember this,
a kiss is just a kiss,
a sigh, is just a sigh.
The fundamental things apply
as time goes by

Sometimes a kiss is just a kiss and sometimes it is much, much more. Take the case of the young married couple in India who were recently brought up on charges for allegedly kissing in public. A number of Bollywood starlets as well as Richard Gere have also been severely criticized for kissing publically. Even Nelson Mandala caused offense by chastely kissing actress Shabana Azmi when he came visiting in the '90's.

The BBC story titled No Kissing Please, notes that

Vedic Sanskrit texts, dating back to 1500 BC, apparently contain the first mention of a kiss in writing. (A caveat from a researcher: "This does not mean that nobody kissed before then, and it doesn't mean that Indians were first to kiss.")

India's famous epic poem and one of the world's oldest literary works, The Mahabharata, composed sometime between 3000 BC and 1500 BC, mentions kissing.

So why does India have this tortured and twisted relationship with the kiss?

Some people play it down, saying those who protest belong to a "loony fringe" of moral fundamentalists. Others say it is a hangover from tradition in an ancient civilisation. Still ot 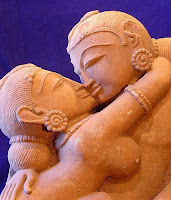 hers say many Indians long for traditional mores as Western consumerist values swamp the country.

...Or is the rage against the kiss born out of a hypocritical morality that equates sex with sin and desire with guilt? As sociologist Shiv Vishwanathan tells me, "India is the only country which has a body police and not a thought police"...So, torn between tradition and seductive imported values, Indians will continue to grapple with the Big Question - to kiss or not to kiss? And, as a friend quips, "When we do kiss, we don't tell".

Living as I do in a violent culture obsessed with sex I can understand the desire for some sense of decorum. On the other hand, I do love, love to kiss my partner in public, and I support the right of my gay and lesbian friends to do the same. How sad would it be to feel that you could not kiss your loved one in public when the spirit moved you to do so.

Above is a photo of a famous temple carving in India. Seems to me they're having a good time. I love much of the ancient temple art from that part of the world; it's sexy, mutual, loving, and passionate. What would our culture be like if these images of mutual pleasure and mature sexual awareness were carved on our temples and churches? The next time we debate religious icons in public places, perhaps we should consider adding some of these?

I will leave you with thoughts of another most memorable kiss:

Jenny kissed me when we met,
Jumping from the chair she sat in.
Time, you thief! who love to get
Sweets into your list, put that in.
Say I'm weary, say I'm sad;
Say that health and wealth have missed me;
Say I'm growing old, but add-
Jenny kissed me!

A Witch Takes Responsibility
Posted by Dj Connell at 12:30 PM