Lady Liberty: The Goddess of Democracy 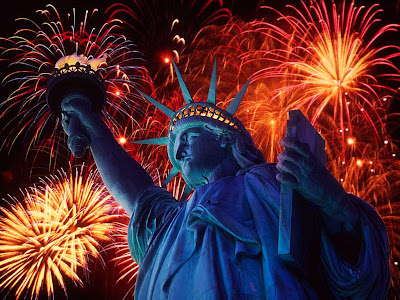 It’s been said that the character of a nation can be seen in its symbols. One prominent American symbol is Lady Liberty, also known as the “Goddess of Liberty.” This feminine spirit sits atop the US Capitol building where she is called the “Statue of Freedom" and, mostly famously, in New York harbor where she is known as the Statue of Liberty.

Terry Macombs writes in her web page on this Goddess:

If you consider the idea that deity might be something that is the direct action of the thoughts, deeds, wants, and dreams of a people over a long course of time, taken to a higher level, then … not only is Lady Liberty a Goddess, she is a powerful one.

The desire for liberty is a powerful force, one that transcends culture, geography, history, religion, and politics. This is one of the reasons why we chose Lady Liberty as the icon for the Pagan Voting Project.

Here is some more information about this powerful image:

The French Revolution introduced Liberty as the definitive symbol for the overthrow of oppression, and by the end of the 19th century, Lady Liberty became the undisputed female emblem of the United States - as portrayed bearing the torch of freedom by Auguste Bartholdi in the Statue of Liberty. (1) When Italian sculpture Auguste Bertholdi created the image he portrayed in one piece the two great muses in his life: The statue pays homage to the body of his beautiful mistress and carries the face of his beloved mother.

Bernard Weisberger wrote a definitive history of the famous statue that stands in New York Harbor. (2) One passage from his book notes that:

The world at large is totally ignorant of the occult symbolism which lies behind the famed statue of liberty which sits astride the harbor of New York, symbolizing its true inner character and purpose. The sculptur who made the grate statue was Italian. his name was Auguste Bertholdi. His work was greatly influenced by the ancient sculptor Phidias who made gigantic statues of the ancient goddesses, particularly Athena, the Goddess of Wisdom and Nemesis ... a goddess who held a cup in her right hand. Before beginning the Statue of Liberty project, Bertholdi was seeking a comission to construct a giant statue of the goddess "Isis, the Egyptian Queen of Heaven" to overlook the Suez canal. The statue of Isis was to be of "a robed woman holding aloft a torch".

The Long Island Museum notes that:

Uncle Sam was eventually utilized by both the political left and right for different causes….His female counterpart has undergone several transformations in identity, clothing, and style. Long before we had the Statue of Liberty in New York Harbor, the Indian Princess [Columbia] symbolized the New World. Over time the Princess became less "native" and more European. Her skin grew lighter, her features became less "Indian," and her dress was adapted to the mode of the moment…. As America matured, the image of Columbia was used to symbolize America, and she was usually depicted wearing a red-white-and-blue dress with a star studded crown.

The Goddess of Democracy

1989 brought news of the Goddess of Democracy, the man in front of the tank and the student massacre in Tiananmen Square?

Grant B. writes in his column, Flying Fists, that

In her heyday, Columbia represented everything good and just and kind about America. She was, in her own way, an avatar of The White Goddess, that principle Robert Graves (and Sir James Frazer before him) described as the Moon Mother, an embodiment of poetry, transformation, and dreams for a wiser tomorrow. In America's mythic history, Uncle Sam only comes around when our young country is mouthing off and spoiling for a fight. Before that, when our military ambitions were dedicated only to defending the fragile dream of democracy, the spirit of the land was seen as a woman, this woman, Columbia, the Goddess of Democracy.

...and 15 year ago she stood, briefly, in Tiananmen Square, before the tanks came...I can't help but wonder, though -- styrofoam and papier mache can't sand up to tanks, but goddesses? They go where they are summoned, by need and by adoration.

So I'm wondering -- where is she now?

The "Goddess of Liberty" Stamp

An interesting discussion of this stamp, referred to by an admirer as "the lady with the chicken on her head," can be found at journalist Gary Griffith’s site. (That isn't a chicken. It's an eagle. Really.)

The Goddess of Liberty In Texas 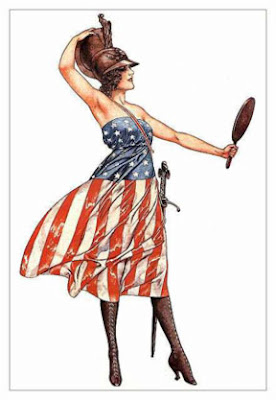 Nearly sixteen feet tall, and weighing just over 2000 pounds, this zinc statue—placed on the Texas Capitol Dome in 1888 where she stayed until the mid 1980s—probably represents Pallas Athena, the Greek goddess of wisdom, justice, and arts and crafts. Athena served as Protectress of the democratic city-state of Athens. Texans of the time had little information about their statue’s origin and this created an aura of mystery that surrounded her for decades.

Latin Origins of the Word Liberty

LIBERTI, LIBERTINI. These two words express the condition of those who, having been slaves, were been made free. But there is a distinction between the two …

Wishing you the blessings and benefits of liberty,

Note: This essay was originally published in 2004 for the Pagan Voting Project Website.

The Goddess of Freedom: From Libertas to Lady Liberty by Selena Fox

With conquering limbs astride from land to land;

Here at our sea-washed, sunset gates shall stand

A mighty woman with a torch, whose flame

Is the imprisoned lightning, and her name

Mother of Exiles. From her beacon-hand

With silent lips. "Give me your tired, your poor,

The wretched refuse of your teeming shore.

Send these, the homeless, tempest-tost to me,

I lift my lamp beside the golden door!"

The New Colossus, the poem by Emma Lazarus which is graven on a tablet on the pedestal on which the Statue of Liberty stands.