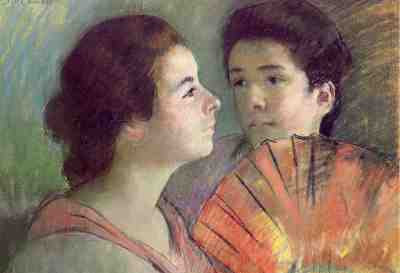 Why Women Don't Get The Films We Want To See

While writing Female characters exist to promote male leads for network profits, I realized something I had never quite put together in so many words. It’s important enough to deserve its own article (thanks, Bellatrys!), so here it is: my screenwriting professors taught me not to write scripts that passed the Bechdel/Mo Movie Measure/”Dykes To Watch Out For” test, and I can tell you why, and this needs to be known.

Read her post Why film schools teach screenwriters not to pass the Bechdel test, it's worth your time.

I caught the Women Impressionists exhibit at the Legion of Honor during my recent trip to San Francisco. The exhibit is breathtaking and features many well loved works and others that are not often seen or reproduced. The good news: It's amazing and continues on through September 21st; don't miss it, if you have a chance to see it. The Bad News: It's only appearing in one American city. How's that for valuing women's creativity? Given the interest in these works, I'm surprised that other cities did not grab the chance to display such a wonderful and unique grouping of pictures from all over the world. Thank you, San Francisco.

Steven Winn, writing for SF Gate, has interesting things to say about this exhibit

Beyond merely pleasing a crowd, which it certainly will do, "Women Impressionists" invites a certain kind of inquiry in the viewer. Gender is the inevitable open-ended question. Did these female artists paint in a certain way because they were women? Were there things they did - or did not do - because they were women? Is there such a thing as a female Impressionist aesthetic? Or, for that matter, is there any discernible female style?

Choice of subject is one clearly unifying factor. To an overwhelming degree, the pictures on display depict women, mostly at home or in garden settings. Men crop up here and there. Now and then a painter ventures out to the theater, with Gonzalès' velvety "A Loge in the Theâtre des Italiens" a notable example. There are a few landscapes and still lifes, most of them small and self-effacing.

Social constraints surely had much to do with what these artists painted. As Ingrid Pfeiffer writes in her catalog essay, even educated and privileged 19th century women contended with significant "prejudices, prescriptions, and restricted scope for action." Female artists painted what conventions, both external and internally imposed, allowed.

But it's also true that all artists have limitations - of circumstance, inspiration, technique, training and influence. What counts is what they make of the material their lives produce. Rather than presenting a case for the connections and affinities in their work, this show reaffirms the singularity of these four women. Each, in her own distinctive way, found a uniquely expressive language. While these Impressionists may have shared certain social conditions and a visual grammar, the sentences and stories they wrote speak clearly on their own terms.

What wonderful stories they tell. If you desire inspiration and biography to spur your own creativity, you might wish to read more about Berthe Morisot, Mary Cassatt, Eva Gonzalès and Marie Bracquemond. You can also search the web for images of their work. These are women you will want to know.