Got Goat?: Goats as Helpers and Teachers 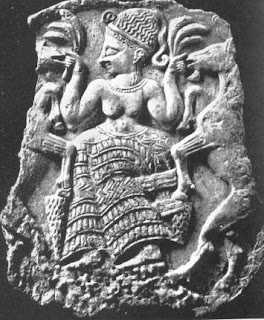 Got goat?
Abby Height, writing for the Oregonian, tells us that "weed gobbling goats eat the right things and give native plants a chance."

For several years, the city of Wilsonville has hired a herd of goats to chomp down invasive plants such as ivy and Himalayan blackberry at city parks and greenspaces.

The goats have been so successful that the Clackamas County Soil and Water Conservation District would like to use targeted grazing as one of its preferred weapons against invasive weeds and plants. The district wants to move toward sustainable, ecological weed control and away from methods that relied heavily on chemicals.

"The district is thinking about how to do things in a more sustainable manner," said Robert Wise, a senior project manager with Cogan Owens Cogan who is advising the district on an updated strategy plan. "We can't keep doing the same things because it just doesn't work for our planet."

Goats and humans have a long history together. According to About.com:

Domestic goats (Capra hircus) were among the first domesticated animals, adapted from the wild version Capra aegargus. Beginning about 10,000-11,000 years ago, Neolithic farmers in the Near East began keeping small herds of goats for their milk and meat, and for their dung for fuel, as well as for materials for clothing and building: hair, bone, skin and sinew.

Today there are more than 300 breeds of goats, and they live in climates ranging from high altitude mountains to deserts. Recent mtDNA research suggests that all goats today are descended from a handful of animals and may have been domesticated in a handful of different places. Archaeological data suggest two distinct places of domestication: the Euphrates river valley at Nevali Çori, Turkey (11,000 bp), and the Zagros Mountains of Iran at Ganj Dareh (10,000). Other possible sites of domestication include the Indus Basin in Pakistan at (Mehrgarh, 9,000 bp) and perhaps central Anatolia and the southern Levant. Other important archaeological sites with evidence for the initial process of goat domestication include Cayönü, Turkey (8500-8000 BC), Tell Abu Hureyra, Syria (8000-7400 BC), Jericho, Israel (7500 BC), and Ain Ghazal, Jordan (7600-7500 BC).

One of the most famous links between goats and ancient civilizations can be seen in the stories about the God Pan and in many elements of the Horned God. (For a hilarious read on the Goat God, read Tom Robbin's book Jitterbug Perfume). Goats were often sacred to the Goddess, although much information about their links to ancient fertility Goddesses has been lost to us. Keep looking; where ever you find the Lady of the Beasts and herding cultures, you will find the Goddess and her goats.

If you wish to honor the Goddess consider helping a woman in a developing country make a living with bees, goats or other animals through a micro loan. My friend Rowan Fairgrove recently sent me the link from Kiva, a nonprofit, non denominational group she supports. As their logo states, these loans save lives.

As the Unicef site notes:

The microcredit system is helping to keep the women’s families fed, clothed and on their feet. Mainly, it is allowing women like widow Vigoumide Ahouagbe to grow their small businesses without waiting to make a profit first. Ms. Ahouagbe can now boast several goats and pigs, a sign of wealth in this area of West Africa.

Young western girls like goats , as well. Cassie (age 11) at the GirlsHorseClub.colm reminds us that goats make excellent buddies for our horse friends. Do you have a son or daughter who wants to learn how to raise animals for milk and show or as pets? Then consider the goat. The 4-H club in Irvine California tells us that goats are good companions:

Goats are fun because they all have different personalities and have different little habits that can be amusing or interesting. Goats are very affectionate and especially during the summer, when they are too hot to be active, they like to just hang around people and get a good scratch. Most goats' favorite scratchy spot is around their shoulder but some even liked to be scratched in between their toes. It is very rewarding to see a goat you have raised from a baby grow up and have kids and grandkids of her own.

Goats have a very interesting quirks. When I read ancient myths, I can see the impact that sheep and goat herding had on our ancestor's view of the world. After reading Shafi's post on Sheep logic vs Goat logic, I would have to say that I have met many sheep

The general populace, with their Sheep Logic, are desperate to be led, having no capacity within them to do so. They largely follow their whims and desires and though they perceive the goings-on in their surroundings and the chaos that envelops them from within, they are too blasé about them do not comprehend all that they perceive. Their limited mental vision and the grass they graze on obstructs their view from the perils that lie ahead. Living off the handouts of other countries plotting bigger schemes on their country, (they) live in a state of almost total unconsciousness.

They are lively and enthusiastic about life’s prospects, though they are deficient in terms of experience and, some times, competence....They are bold and brash, principally driven by an impulsive rush into things. Their skewed judgment of their own vulnerability hinders them from looking further ahead into the possibilities of their actions. Amused by their own frolicking, they are diverted from the flock, though their senses are promptly reawakened by the hint of fox’s presence.

Those of us who do community organizing work with a great many sheep and goats, cats and other animal archetypes. Each type has something to offer and each has challenges we have to deal with. My best advice is to learn how they think and how they view the world. (For a humorous take on this, read Issac Bonwits article Making Fauna Pagans). And by the way, learn to understand your own challenges, as well. Most leaders stumble because they fail to understand themselves. Word to the wise, if you are a goat, you are a nature leader and you will travel paths that more timid souls will avoid. You can also be stubborn, and this can get in your way. (Ahem....at least, that's what the older kids tell me).

Photo: Ugarit Goddess Asherah with sheaves of wheat and goats.

For drummers: Here is a note on how to buy the best fair trade goat skin for your drum. While you are at it, consider green practices when choosing a wooden drum.

Please note: Links are for information only. I am not endorsing these products, nor have we received any money or products from these companies in return for these links.

(1) Does this remind you of anyone?

The goats....are expert whiners and their Qalaad could be heard a distance away. Little floods could cause serious inconveniences to their health and a flash of lighting would agitate their nerves. If swept away they have little chance of survival and, as a habit, dip headfirst into the water. They are often heard making a racket of noises as they are seized by the surge.....Those who rule, with their Goat Logic, are very much short sighted and scatter at the slightest hint of a commotion. They are an impetuous lot and carry huge, impenetrable solid heads above their scraggy shoulders - a weight too much for them to bear and as a result of which they disappear after a short time. With an imprudent penchant for control, they lead their susceptible flock astray into parched fields and dehydrated pastures where the Jiilaal winds have swept away the very remnants of life from the surface.