The Witches Ball: When A Party Stands for Pagan Values 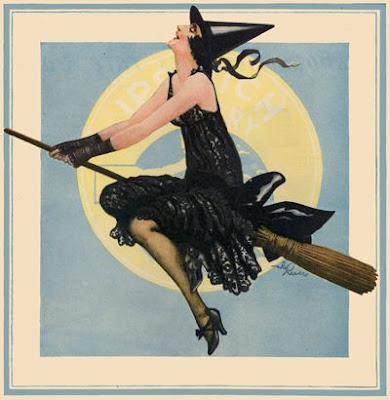 Among the values I hold dear as a Pagan is the idea that it's important to do good and work within the larger community in order to show other people what Pagans are really like. Which is why I throw great parties.

I will explain: It is not enough for me to simply organize a May Pole dance in a park (much as I adore dancing with a bevy of Green Men in spring). I believe in organizing earthwise projects that support local charities and grass root causes. This is why I developed and produced our Full Circle Witches' Balls while I lived in California.

These parties, which occurred every year before Samhain, drew Pagans and others from all Northern California and the western states to participate in a gala costume ball and charity event for our local Humane Society. During the ball we presented the Gaia's Guardian Award which came with a $250 check for someone (not necessarily Pagan) who had done good work that "benefited Mamma Gaia and her creatures". As we said every year, "what counts are good deeds and a noble heart". (1) We also raised thousands of dollars every year for companion animals that had been abused as well as for those that needed extra medical care and/or had special needs. (2)

Our Witches' Ball was purely a social event. It was family-friendly as well as being drug and alcohol free. It took a full year to plan and organize and the people on our various committees came from a variety of faiths and traditions. It worked so well that some years later we added a Beltane Ball, as well.

My council members and I believed in this work so much that we put our own money on the line to make it happen. If you think that's easy, then throw your families' credit card across a table and book a huge hall for $8,000 before some bride gets there before you. Then spend the next year hoping desperately that enough people and vendors will come to make it all worthwhile.

Every year we would pick a costume theme that would inspire our attendees. As a former educator, I took advantage of this teachable moment to pick themes that would say something about the roots of Pagan culture, as with our Bohemian Ball. (3)

Here is what one newspaper writer saw that night:

Over 700 attendees from as far away as Oregon and Arizona came to the Witches Ball dressed in a ruffled menagerie of costumes. Corsets abounded. Biter spotted people dressed up like sailors, gypsies, 19th-century aristocrats, snake charmers, broke poets, writers, street performers, magicians, mediums and prostitutes. A few folks even showed up in limos.

Despite the "Witches" moniker, this was not an event restricted to pagans. Biter found Christians, Buddhists, and even agnostics among the organizers and attendees. Senior citizens and kids dressed up as well. And the whole thing, oddly, was a benefit for the Humane Society of Santa Clara Valley. "You've got people with tattoos and piercings and then you've got grandmothers and children," said our lovely tour guide. "Everyone can be here, and no one is considered odd. It's a family event for the humane society and it's a good way to show people [on the outside] who we are."

One year, at the beginning of the Iraq war, I choose a theme designed to remind people of a period in history when vastly different cultures and faiths mingled peacefully, sharing scientific and religious ideas, along with trade goods, spices and art. This was our Silk Road ball. The Silk Road period was also a time when women had a great deal more freedom, power and autonomy within these cultures. Again, we had a teachable moment... (4)

Sometimes we focused on play, on the life force and on color, joy and light, as with our now famous Fairy Ball. Some muse must have guided us that year because that's the one that came three weeks after 9/11. I thought we'd loose our shirts. But people needed something life affirming just then. They didn't want to be alone. They were finally ready to step away from the news box, and they wanted connection and support. Above all, they wanted to help, they wanted to do something, anything they could, in order to tip the scales away from the horrors they had witnessed. We were tripping over volunteers that night and the attendees! My gosh, I've never seen so many beautiful costumes. And if you don't count the last Inauguration, I've not seen so many people being kind and having fun in one place. It turned out to be the largest and most successful ball we ever held.

When A Party Stands for Pagan Values:

So, here is my Pagan values post for today: I believe in putting my money where my mouth is. I believe in giving back and doing what I can to help children, animals and others in need. As Terry Pratchett says, "A witch stands for those who cannot stand for themselves." I believe in working with people who are smarter and far more creative than I am because they raise my game. I believe in throwing great parties that bring people together for a good cause. I believe in the awesome power of belly dancers to raise energy, heat and hearts, and that a DJ who knows how to spin the right mix is a rock'n Shaman. I believe that working for a good cause is as important to me spiritually, personally and emotionally, as those times when my friends and I gather under the moon, and I love that moon thing a lot. And I believe in reaching out to those of like minds because when you gather us together with the many Great Hearts from other faiths and traditions you can no longer say that Pagans are a small, disorganized, fringe group of crazies who yak on uselessly about silly things like climate change and civil rights but who do nothing to make the world a better place. Finally, I believe in standing on a roof top (or in this case, a stage) and saying "This is who we are. This is what we stand for. These are the actions that prove it." Our annual Witches' Ball did all that during the Bush Administration.

Are you throwing a Pagan event this year? If so, what does it say about your core values and beliefs?

Thanks (yet again) to all our Council Members, Directors, Chairs, volunteers, web builders, decorators, vendors, entertainers and friends who made these events possible. It took a village, believe me; a village of funny, smart, talented, dedicated people, all of whom worked long hours without pay. I will always be grateful for the things you taught me and for the pleasure of your company.

The Wildlife Center of Silcon Valley

In previous years, the Gaia's Guardian Award was given out at the Witche's Ball, a costume ball, charity event and fundraiser hosted annually by Full Circle. At that time, it was given to heros and heroines in California. The award is now given out nationally. The 2005 recipient was United Animal Nations for their work benefiting animals left abandoned, starving, and hurt after Hurricane Katrina. In 2006 The Gaia's Guardian Award was given posthumously to Carol Chapman, tireless advocate and Cat Rescue Mamma extraordinaire.

(2) The Humane Society of Santa Clara, which is one of the largest animal shelters in the U.S. has just moved from a set of sad, delapated buildings built in the 1950's to a state-of-the-art facility with a medical unit: Check it out.

My respect and thanks go to all the good people in Silicon Valley who made this new shelter possible and to the staff at that shelter who give so much to the animals in their care.

(3) The Bohemians in Paris: As we noted on our event site, "The term Bohemian was used then to describe free living, free thinking people. Bohemians questioned the social conventions of their day and they were independent, artistic, witty, and colorful. They believed that one could make one's life into art and that art should reflect real life. They were enthralled with the mystery and wonder of existence." Add to this, that many were sad, aimless middle class kids who were only playing at art and who killed themselves by drinking and drugging too much or dying of STD's.

The Bohemian counterculture, for both good and ill, influenced the Beat Generation, which in turn influenced the Hippies, New Age thinkers and feminist communities in the U.S. especially in San Francisco. These movements had (and still have) a large influence on modern Pagan culture and I wanted people to see beyond the fabulous clothes to the issues of freedom vs responsibility, prosperity vs materialism and healthy sexuality vs exploitation that the Bohemians were dealing in their day and which mirror issues we deal in ours. To be honest, I'm not sure how well I succeeded in that goal, but we sure had a great time.

(4) The Silk Road: For more information on this period I recommend reading Life Along the Silk Road by Susan Whitfield

Posted in honor of Pagan Values Month
Posted by Dj Connell at 9:22 AM

This is wicked! Pagan Parties for Pagan Values - its so ingenious my brin is about to implode . . .

You are an absolute heroine! I've been involved, mainly on the outskirts, of some fairly fabulous parties for good causes in the Queer Community... and I've heard of different Witches Balls over the years... but to see the ethos of working hard at having fun while doing good articulated so clearly by and about Witches... thats the sort of thing I signed on for so many years ago... thank you!

There were a lot of good people working to make those events happen. I was lucky to find so many talented, organized and dedicated people who would give so much for Pagan Pride and a good cause.

I'm enjoying Pagan Values month - how is that working out for you?