Gay Weddings: What To Expect? How About An Economic Boom? 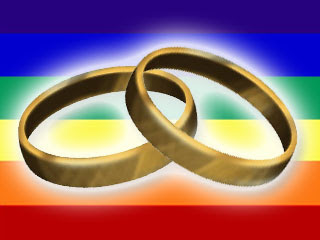 My friends in California tell me that the wedding business, something my husband refers to as the "Marital Industrial Complex" is thrilled at the thought of all those wonderful gay and lesbian weddings. Other states take note: This will indeed be a boon to the economy. Think of all those outfits, flowers, rings and cakes to be designed and bought. Not to mention all those presents. Not even to mention the honeymoon cruises and trips (the travel industry can't wait) and the halls rented, and all the money made from out-of-towners coming in to either attend a wedding of their dear friends or to have one of their own in one of California's beautiful (and tolerant) locations. (1)

"The good news for California is that in the face of probably the worst budget problems the state has ever faced, the LGBT wedding industry is going to be a financial shot in the arm," said Jeffrey Prang, mayor of West Hollywood, a popular destination for gay travelers in Southern California.

A study issued this week by UCLA's Williams Institute for Sexual Orientation and the Law projected that gay men and lesbians will spend $684 million on cakes, photographers and other services over the next three years unless voters reverse the high court's ruling in the fall.

The researchers found that about half of the state's more than 100,000 same-sex couples will get married during the next three years, and an additional 68,000 out-of-state couples will travel to California to exchange vows. The study estimated that over that period, gay weddings will generate $64 million in tax revenue for the state, $9 million in marriage-license fees for counties, and some 2,200 jobs.

[Update: 12:13 pm: A reader named Amanda just sent me a link to an article on how same sex couples can save money on their California weddings. It also has notes on how to stay debt free after you say "I do". Enjoy.]

I suppose that we can also expect some regrettable wedding trends as this cartoon suggests, like the ring bearing cat and jumping the swiffer. We can also expect a few divorces, and sadly, some custody cases. Between the pre-nups and other legal niceties lawyers across the nation are having a field day.

If New York moves forward (and it's facing some new challenges) we can expect to see some East Coast friends get married here and enjoy the benefits of a legal union there. Or vice versa. As goes California and New York, eventually so goes the nation. The Pew Research Center notes that there is less and less opposition to gay & lesbian marriage, adoption and military service over time.

About time. And, very profitable, too. That, at least, will help convince some legislators that doing well and doing good go hand-in-hand.

Image: from an ABC story titled Gay Couples Rush To Get Married

(1) From where I sit, the Pacific Northwest has many of the same tolerant (and business oriented) ideas. Same sex marriage has been legal in Oregon for some time, but only because we have no law that bans it. Look for gay and lesbian friendly travel to become more and more prominent over time. A note to my wine loving friends in other states: we have some lovely wine country out here - come on up!
Posted by Dj Connell at 10:24 AM