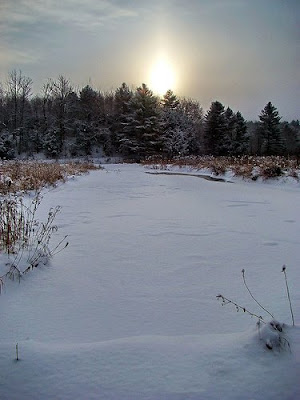 And so the Shortest Day came and the year died
And everywhere down the centuries of the snow-white world
Came people singing, dancing,
To drive the dark away.
They lighted candles in the winter trees;
They hung their homes with evergreen;
They burned beseeching fires all night long
To keep the year alive.
And when the new year's sunshine blazed awake
They shouted, revelling.
Through all the frosty ages you can hear them
Echoing behind us - listen!
All the long echoes, sing the same delight,
This Shortest Day,
As promise wakens in the sleeping land:
They carol, feast, give thanks,
And dearly love their friends,
And hope for peace.
And now so do we, here, now,
This year and every year.

Poem: The Shortest Day by Susan Cooper courtesy of the Portland Revels. Their next concert is as follows:

The program on the theme of "Birds and Beasts: Songs from the Animal Kingdom" features songs of hungry mice and frisky cats, bluebirds and black sheep and many other lovable creatures from folk, traditional and contemporary sources. Music for all ages!

No pre-reservations are necessary and a suggested
donation of $10 to $20 per person to support the group will be accepted at the door. A reception with light refreshments will follow the concert.

St Michael and All Angels Church is located at 1704
NE 43rd Ave in Portland.