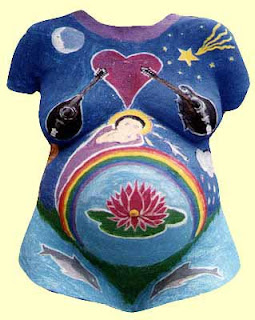 I recently found (was gifted with?) two useful pieces to the mind/body puzzle. The first came from an article titled I've Got A Feeling which appeared in the March issue of O Magazine. It is written by Chip Brown. (1) I found this paragraph illuminating:

In the early 1980's, scientists rediscovered the enteric nervous system in the gut (first mapped out 60 years earlier) - a 'second brain' of some 100 million nerve cells that runs mostly on autopilot, a regulating digestion and playing a vital part in the body's immune system. Intriguingly, it's also buzzing with mood-altering neurotransmitters, identical to the ones in the brain - biochemical’s like serotonin (a major factor in depression) that neuroscientist Candice Pert, PhD, poetically called "the molecules of emotion." Literally connecting the brain to the belly is the remarkable vagus nerve: Stimulate that with an implanted device, and you can relieve depression and improve learning and memory.

There is a small section within I Have a Feeling titled The Gut Whisperer, written by Nancy Napier. It talks about the belly as stress detector, and has recommendations for listening to our body. Here is an excerpt:

Your gut is a brilliant barometer of stress. This exercise is simple: Just allow your focus to settle within your abdomen. Is your gut quiet or active? Open or clenched? Soft or tense? Spacious or tight?

If you're tight, gripped, or clenched, you're probably dealing with some kind of stress. Ask yourself: What could I imagine right now that would help me to feel better? Maybe it's visualizing walking on a beautiful beach, eating at your favorite restaurant, or relaxing at a spa. You might want to just sit still and breathe deeply for a few minutes.

Whatever comes to mind, take a few moments to let yourself go with the thought, bringing in an awareness of colors, shapes, textures, smells, temperature - all the qualities that make the experience alive for you. You'll know you have brought your stress level down when your gut becomes warm, spacious, soft, or quiet, or conveys some other comfortable sensation. As with all skills, learning to listen to - and trust - your gut make take practice, but over time you'll discover a valuable and reliable guide.

A second piece of the puzzle may be found in The Women's Belly Book written by a yoga teacher Lisa Sarasohn (and referenced in that same article).

I played around in Amazon this morning, and found another book of interest, titled Divining the Body: Reclaiming the Holiness of Your Physical Self. Based on the chapter titles, I think it would appeal to people from many different faiths and paths.

I would also like to recommend an article by MuseMother titled Inner Voice and Menopause.

As we all know, Ms. Winfrey is an avowed Christian with very progressive ideas. She is also one very smart lady who knows her demographic and who likes to work with other smart women, so I have to wonder: Does she really know how many bits of Pagan, Buddhist, Taoist & New Age thinking O Magazine offers her readers under the innocuous slogan "Living Your Best Life"?

Many of the Pagan women I know watch or read Oprah and one fundamentalist and so called "former Pagan" has called her a "paganising maven" and compared her to Starhawk. He means it as an insult of course, and is referring only to the matter of influence both women have on this culture (influence which frightens him down to his boots.). Starhawk and Oprah are activists in their own way but their skills and their focus are Yin and Yang. Speaking archtypecially, Starhawk is at her core an Iconoclast, a Poet and a Mystic. Her politics and activism are rooted in the traditions of radical feminism. Ms. Winfrey, too, is a feminist but of a rather different sort. Raised in poverty in the Jim Crow south, she is a pragmatic businesswoman and her archetypal profile is very much that of Builder, Counselor and C.E.O. That said, she, too, has a ministry of sorts, and now, it seems, wishes to become a political force.

The Church of Oprah

"She's a really hip and materialistic Mother Teresa," says Kathryn Lofton, a professor at Reed College in Portland, Ore., who has written two papers analyzing the religious aspects of Winfrey. "Oprah has emerged as a symbolic figurehead of spirituality."

The article goes on to say that "In a November poll conducted at Beliefnet.com, a site that looks at how religions and spirituality intersect with popular culture, 33% of 6,600 respondents said Winfrey has had "a more profound impact" on their spiritual lives than their clergypersons."

Some Pagans see Oprah as a form of Bodhisatta, or at the very least, as one who is closely connected through her charity work to Guan Yin. I would love to know just how large her non-Christian readership really is.

Recently, she caused a great deal of controversy with her enthusiasm for The Secret, a collection of simplistic, materialistic "teachings", filled with wishful thinking, New Age cliches and Self Help banalities. If anything, this incident shows us just how unaware Ms. Winfrey is when it comes to the history, ideas, and issues involved in spiritual practices outside the Judeo/Christian mainstream. The "revelations" contained in The Secret are common to anyone who has read even most basic books on these subjects. On the shadow side, the materialism the authors espouse, coupled with the guilt and shame the book engenders among those readers who just can't believe enough to make themselves rich and healthy appalled many of us. Bill Moyers, a believing, progressive Christian, has read a wide variety books on spiritual traditions, and is a proponent of writers like Joseph Campbell. One wishes that Ms. Winfrey would follow his example. When watching Oprah talk about The Secret, I longed to give this well meaning, mind hungry reader a better book list. (2) When I consider missteps like this, I remember that the lady is human, and she continues to learn. I notice that when she errs, she errs on the positive side of her nature, and not on the negative. In other words, she was taken with (or taken in by, depending on your point of view) people proclaiming that we each have a destiny and the power to claim it, and that connecting with our Highest Self involves understanding our connection to the universe and the energy therein. The snake oil aside, this core wisdom is something most Pagans can relate to. Given the number of Pagan con artists we have among us who use the positive teachings of our path to sexually and psychologically manipulate others, it might behoove us to view this incident with some compassion.

The Personal Is Political

For over twenty years, Oprah Winfrey has led in the best way; with the courage of her own example. She helped us to heal after 9/11, built new homes for Katrina victims, worked to end the genocide in Darfur, talked frankly and intelligently about women's issues, educated her audiences everything from rape and racism, supported gay marriage, and stood up for tolerance on all fronts. She has also said on more than one occasion that she believes there is "more than one way to God." Oprah Winfrey has used her influence to raise millions for causes she believes in and recently pledged 40 million of her personal wealth to build a multi-ethic girl's school in South Africa. Recently, she has put her considerable powers behind a progressive, well educated, anti-war candidate who is married to a professional woman as intelligent and committed to social justice as he is.

It just gets more interesting from here.

What I find most moving this is that we are watching a woman who, by her own admission, stuffed her personal pain and stress down with food and struggled with weight and self esteem issues her whole life, who is getting in touch with her own belly wisdom. The older she gets, the less she gives in to her dis-ease, and more in touch she becomes (both emotionally and physically). The more she learns, and the more chances she takes, the more powerful she seems to be. She believes in helping others, but better still, she helps them to help themselves. These days, Ms. Winfrey seems to be more and more in touch with the Goddess we Pagans know well, a curvy, powerful, laughing, positive, creative, vocal and very active presence. Regardless of what she calls this sacred source, I wish her well. I will continue to watch and wonder where it will take her.

(2) The CD offers a lush production design ripped off from the movie version of The Da Vinci Code and it is no doubt intended to appeal to fans of that book. As Salon.com notes in Oprah's Ugly Little Secret, she has done little more than support a New Age pyramid scheme. It was not her finest hour, but a woman who has had so many fine hours can afford one or two that do not shine so bright. Here is a quote from the article Self Helps Slimy Secret (Note: The full article is worth reading, please see the link below): A couple of weeks ago, she "clarified" her views on the "law of attraction." Although she didn't apologize for endorsing "The Secret," she said the law of attraction "is not the answer to everything. It is not the answer to atrocities or every tragedy. It is just one law. Not the only law. And certainly, certainly, certainly not a get-rich-quick scheme."

Image: This comes from a site called Belly Masks

Sia,
Wonderful article on Gut Wisdom, and what a gorgeous image of a belly mask!

The "second brain," home of our gut feelings, is truly amazing.

For more on "what's in a belly," see the bevy of articles I've posted at http://honoringyourbelly.com/articles

Great article on Gut Wisdom! Really insightful. You may also be interested in our own work on the core competencies of the gut brain and how to align, head, heart and gut brains and tap into their intuitive wisdom. We've spent 3.5 years, guided by the neuroscience findings on these 'brains', exploring the prime functions and communication mechanisms of the adaptive, functional and complex neural networks, or 'brains', in the heart and gut regions. If you are interested, check out www.mbraining.com for a bunch of free articles, interviews etc. and more on our work and models.