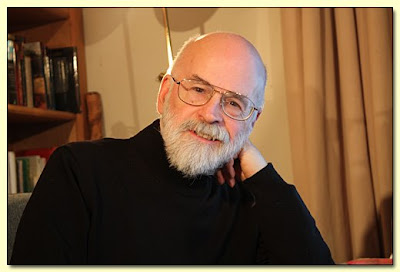 What a lovely way to end the year....My husband came in to say "Terry got knighted" at about the same time I received an email on the same news from my pal Hecate.

This means that fans, while not calling me Sir, must now refrain from throwing things. Regrettably, no sword is included in the box.

The BBC states that:

He said: "There are times when phrases such as 'totally astonished' just don't do the job.

"I am of course delighted and honoured and, needless to say, flabbergasted."

Last year Sir Terry was diagnosed with early-onset Alzheimer's disease and has since campaigned to raise awareness of the condition.

Neil Hunt, chief executive of the Alzheimer's Society, said: "I would like to congratulate Terry on this fantastic and well-deserved achievement."

"Terry is not only a successful author and well-loved public figure; he is also playing a key role in fighting the misunderstanding and stigma surrounding dementia."

In other Pratchett news, tickets to the North American Discworld Convention continue to sell well despite the bad economy.

Wishing you a Happy New Year. According to Terry, on the Discworld, this coming year will be the Year of the Pensive Hare. (1)

Photo (and title for this post) snaked from the talanted folks at PJSM Prints - this is the best spot I've found for the latest news.

I spent some time tracking this down today. Knowing Terry, it comes from several sources, including this Buddhist parable, this sculpture and this music CD.

A children's book of these stories can be found here.

Cartoon: From User Friendly
Posted by Dj Connell at 12:35 PM