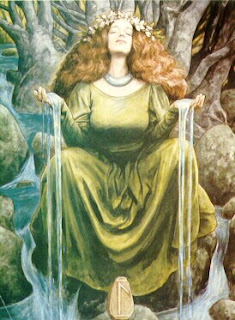 
Combining various Christian aspects with ancient pagan traditions, the early Americans began celebrating spring festivals about the latter part of the Colonial era; however the type of celebration was dependent upon the area of the country. Puritan New England saw the celebrations as pagan, and even followed very strict celebrations of Easter. The Southern states, where the climate was moderate to semi-tropical for most of the year, held planting festivals and barbecues or outdoor parties. Spring, especially for the Southern aristocracy, was the beginning of the social season start with New Orleans’ Mardi Gras and Charleston’s St. Cecilia Balls. This was also the beginning of the horse racing season in the South and many of the balls and celebrations coincided with the opening of the various race tracks. The Mid-Atlantic states celebrated what we, today, think of as being a more traditional Spring Festival.

Spring Festivals throughout New York, New Jersey and Pennsylvania focused primarily on the planting and rebirth aspect of the season as well as the end of winter. Homes would be opened up and thoroughly cleaned while fields were plowed in preparation of the planting season. After the work was finished, quite often, the area farmers and their families would go to the local town where various festivities were held. Here they would find markets where plants and seeds were offered for sale alongside jellies, preserves and baked goods made by the local women. Music and dancing, entertainments for the children and auctions of household and farm items were always a part of these holidays. Many times the local militia units would gather and drill and often political campaigning was found. The early Suffragettes and Temperance leaders could often be found at these events promoting their causes, while the town’s tradesmen such as the blacksmiths and wheel wrights were kept busy repairing the local farmer’s vehicles.

We have festivals like this here in Oregon. Our community includes a lovely mix of families, visiting cyclists, birders nature lovers, foodies, retirees, dog parents (with dog, of course), and horse folks as well as alpaca and organic farmers. We also have barbecue and live music (although the homemade breads are just as likely to be made by the men). It is true that "The more things change, the more they stay the same"; good people can be found anywhere you find jellies, preserves and baked goods. (1)

Art: Lady of the Water by Brian Froud

(1) From an article on Spring Festivals at the website for the Historic Village of Allaire. The site also offers some 19th century recipes.

I recently came across your blog and have been reading along. I thought I would leave my first comment. I don't know what to say except that I have enjoyed reading. Nice blog. I will keep visiting this blog very often.