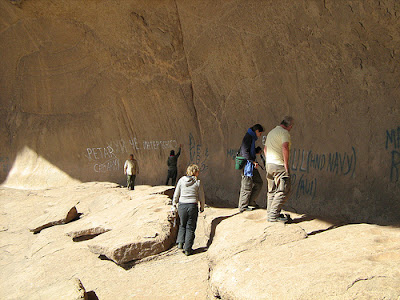 I was saddened to read about the recent defacement of 6,000 year old rock art by UN Peacekeepers in Morrocco. This is our human heritage and defacing, stealing or destroying ancient art effects us all. The climate scientist who broke this story at the Sand & Dust blog writes:

A recent visit (Nov-Dec 2007) to Western Sahara by this blogger revealed a more unsavoury legacy of MINURSO’s presence in Western Sahara - the deliberate vandalism of archaeological sites. The most dramatic example of this is at Lajuad in the Southern Sector of the Polisario-controlled zone, where MINURSO recently installed some communications hardware on the inaccessible (except by helicopter) summit of a smooth granite hill. It appears that the MINURSO personnel responsible for the installation amused themselves by spray-painting their names on the wall of a rockshelter that is also an important archaeological site (see photos).

It is a tragedy that UN personnel tasked with resolving one of the world’s longest running military and political conflicts are engaging in the willful destruction of important archaeological sites that have much to teach us about the prehistory of a part of the world that is virtually unknown to the international research community. It is also a tragedy for the cultural heritage of Western Sahara, and is indicative of a contempt for the Sahrawi people on whose land these crimes have been committed.

More pictures can be see at his site.

Wanna Be Pagans and New Age folks have been just as guilty of defacement and disrespect, as Documentary Works notes:

The appearance of various "New Age" symbols at or near rock art sites, such as "medicine wheels" and various "offerings," is increasingly common and a source of concern for land managers, site stewards, rock art researchers and some Native Americans. Such symbols are presumably placed in response to the marks already present, as indigenous rock art sites come to serve as shrines or ritual sites for non-Natives.

Folks, any good camper can tell you that you must "Leave nothing and take nothing away". If you are visiting an ancient site, even if it is part of your heritage and especially if is is not, it is not your place to add to it. Make a shine in your heart and leave it at that.

Petroglyphs are images created by removing part of a rock surfaces by incising, pecking, carving, and abrading. Outside North America, scholars often use terms such as "carving", "engraving", or other descriptions of technique to refer to such images. Petroglyphs are found world-wide, and are often (but not always) associated with prehistoric peoples. The word comes from the Greek words petros meaning "stone" and glyphein meaning "to carve" (it was originally coined in French as pétroglyphe).

The term petroglyph should not be confused with pictograph, which is an image drawn or painted on a rock face. Both types of image belong to the wider and more general category of rock art. Petroforms, or patterns and shapes made by many large rocks and boulders over the ground, are also quite different. Inukshuks are also unique, and found mainly in the arctic.

Totally agree with the point that we should not be defacing ancient rock-art, leaving crystals, tea-lights and other detritus at burial mounds, stone circles etc.

Thanks for bringing the rock-art story to my attention, I wasn't aware of it. That is very disturbing.