As we move forward on the wheel of the year, I would like to share this video about St. Brigid along with an article I found at Wren's Nest News titled From Goddess to Saint and Back Again. May Brigid's story inspire you to find your own way within the entrenched patriarchy that is still so much a part of our culture(s).

Excerpt: (read the whole thing, it's well worth your time)

History and myth are particularly difficult to separate when it comes to figures such as Brigit whose lives straddled the political divide of Celtic and Christian Ireland. According to Mary Condren, director of the Institute for Feminism and Religion at Trinity College Dublin, the cult of Brigit has origins long before the historical figure we associate with the fifth-century saint. “I consider Brigit [the old Irish spelling of Brigid] to be a pre-Celtic goddess as the root of the word Brí is an indigenous European word for female divinity.”

Condren, who is the author of the Serpent and the Goddess: Women, Religion and Power in Celtic Ireland (New Island) is one of a number of academic theologians who have promoted a wider interpretation of Brigit than that which was handed down through Christian churches over the centuries. (1)

“Layers of separate traditions have intersected, making Brigit out to be one of the most contradictory figures in Irish history,”she writes. “But, it could be argued that precisely this complexity has enabled the figure of Brigit to move seemingly so effortlessly through thousands of years.”

...Brigid was already known for her great farming skills and tremendous energy. Coupled with her unwillingness to marry, these talents must have propelled her to seek land to start her monastery in Kildare. The details become a bit sketchy here but myths abound regarding her healing powers, negotiating skills and keen sense of justice.

...there is no doubt that monasteries offered women an alternative to marriage. They also gave these early holy women a place to learn to read and to write. Monasteries were also great centres of craftwork, farming and places of refuge for the poor and the sick,” explains Padraigin Clancy, folklorist and historian.

...in Christian churches in Ireland, there has also been a revival of interest in her as an icon of female spirituality outside of the more institutional (and some would say patriarchal) forms of Christian worship. One such “re-claiming of Brigid” is in Solas Bhríde in Kildare where in 1992 a group of Brigidine Sisters founded a small Christian centre for Celtic spirituality and re-lit the sacred fire associated with the monastery Brigid founded in Kildare or Cill Dara, which translates as church of the oak. Cáirde Bhríde (Friends of Brigid), an ecumenical community of women and men who promote peace, justice, reconciliation and care of the earth, has developed out of Solas Bhríde, and the social justice organisation Action from Ireland (Afri) holds its annual conference in Kildare each year. 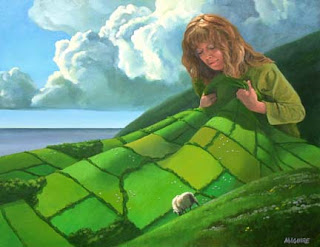 Women and the Goddess in Old Ireland:

It is no wonder to me that a talented woman of that time might seek fulfillment in the best way she could. This might lead her to avoid marriage (and the unending childbearing that was a woman's lot in those days) and become a leader within the framework and protection of the church while making her way right under their noses. (It is, after all, what many women still do today in churches, corporations and universities). Nor am I surprised that such a vital, creative and empowered woman might be associated with the stories surrounding the Triple Goddess of the Celts. There is a wealth of inspiration to be found in the Brigit stories and I take what I can from them, whether they come from my own tradition or someone else's. For example, Mary Condron calls Brigid a "soulsmith for the New Millennium". In an article of the same name she writes:

One hundred and thirty women from all traditions and none gathered to explore the spirit of Brigit through music, crafts, poetry,artwork, dance, and reflection: peace workers, community activists, artists, poets, psychotherapists, teachers, full time parents, musicians, and theologians.

Why Brigit? Why does her spirit still inspire today's Irish poets, artists, musicians, and soul seekers? What might the traditions of Brigit have to offer to contemporary women's search?

...Today, we draw on her pre-christian roots, the archaeo-mythology of her sites, her Christian Lives, and the rites to be found even in contemporary folklore, to bring women together in search of new cauldrons to hold, ferment, and nourish our hungry spirits. Against the backdrop of marching bands, violent oppositions, and the patriarchal mythologies...Brigit's spirit is fresh, untainted, and multivalent.

...The old dichotomies collapse under the weight of laughter; the old orthodoxies strain to the sounds of music; the old dogmas sway in the dancing of freed spirits.

The rest of this evocative and (to me) inspiring article can be found at the Institute for Feminism link below, in a PDF file. I would recommend it to anyone who studies Brigit/Brigid and the celts.

This post is for my sister Aeron who loved books, dogs, cats, cars, Brigid, gardening, and wild lands. We lost her eight years ago to breast cancer. She would have been 56 this month. Miss you, girl.

(1) For more on this subject read Sin, Sexuality and Sacrifice - Deconstructing the Patriarchy - An Interview with Dr. Mary Condren

Institute for Feminism and Religion

Lovely post. I will light a candle for your sister tonight. Now, I need to go make that lovely afghan!