You Say "Witch" Like It's A Bad Thing: Thoughts On Our Image At Samhain 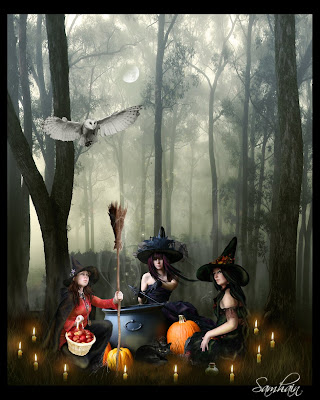 VOTE!
Your Rights Depend On It

Thoughts On Our Image At Samhain

A friend just called to say that decorating elves in her office had put up the ubiquitous warty, green faced witch figure on the wall, next to the Frankenstein, Dracula and the other holiday whatnot. Here's the good news: they were good enough to take it down the evil hag image when she asked them to. Thank you, nice people.

A lot of folks don't know why we dislike that image. In short, it is for Pagans the equivalent of black faced entertainers to African American feelings. (And for some of us that's putting it too mildly, see "She Returns: The Halloween Witch" below). I appreciate the fact that her co-workers listened to my friend and honored our heritage and beliefs, even though they do not share my spiritual path. Which brings me to the image I've posted here. It looks to be the exact opposite of the Halloween Hag, yes?...or no? Or is it just another cliche? (Click on the photo to see the larger image and get the full effect). Speaking for myself, I have a love/hate relationship with this photo. It is beautifully done. The women and the silky, golden-eyed black cat (1) look great. At the same time, I could wish they were laughing or looking more like women together really do then posing in such a serious, witchy woman-gazing-into-the-distance kind o' way. (Fine for a album cover, sure, but not quite the image I think of when I remember the faces of my women friends in circle who do, I'll admit, look fab in costume). In fairness to both the photographer and the subjects, they may have chosen to do it this way simply as a gothic giggle - no harm at all in that. But when I look at it, as a Witch, I think that this is, in many ways, how we Pagans like to see ourselves - beautiful people in romantic clothes, mystic ..er...mist whirling around us, eldrich gazes that hint of things not normally wot of and, of course, the Hogwarts owl. Such a mythic, muggle tease this image. Somewhat limited, as well. As Terry Pratchett likes to say "It bodes".

This stuff is fun, I know, you should see my closet. Still, I keep thinking that this photo really doesn't capture the Witches I know, women who tend to have armfuls of laundry, or kids or food. Often as not you'll see them with garden dirt on their shoes and a book on their minds. What if we took a photo that's a bit more real, one that showed three witches in a kitchen where we see a cauldron (used, not showy) next to the recycling bin? Let's put some tarot cards (or beads or knitting or a CD) on top of a long To Do list. Put them in street clothes, with the pentacles and such tucked inside their clothes, close to their hearts. Not nearly as sexy an image, I know, but it's a bit more true to form. (2)

Here's another thing: As a Green Witch who does, in fact, live in a forest, I'm thinking, "Gosh, they must be freezing out there". Go ahead and laugh, I've known covens go out in into the cold wearing much less and others who think they have to drum the sun up in February and then wonder why they all get so sick every year. Our great-great grandmothers knew better then to wear fru-fru outdoors in winter, and those candles! Unshielded?...in the woo-eds? Somebody's gonna start a fire. Still, the girls are lovely aren't they? Not a wart among 'em. So, I'm of two minds about this one, even as I love the idea of the fun they must have had when making it.

To me, this photo begs a question: When do we move beyond both the scary Hag and the dark, sexy/dangerous (Succubus! Incubus!) fantasy images in the public mind and become just Jack and Jill, the Pagan folks down the street? When that day comes, you and I will be much safer. Yet, when we move from being "the other" to "just folks" we will need to lift our fair share of the civic load. I hope we are up to the task. Are we willing to do that as a group? When you think about it, it is so much easier to stay in the shadows, looking "Cooler than thou", and chant......

What do you think?

Blessed Samhain, Happy Halloween, A Peaceful All Soul's Night and a Joyous Dia de los Muertos to you all,

She Returns: The Halloween Witch

Day of the Dead Feast & Recipes
Lovely video, too. I want to eat at Mama's place.

Dia da los Muertos (Day of the Dead) webpage
This is a lovely page filled with history, recipes, art, crafts and altar notes and photos.

(1) Only one? Not bloody likely. But major points for showing the image of a happy, friendly and well cared for cat instead of the spooky, evil or frightened beast we usually see this time of year.

(2) A cat is sleeping on top of the (very full) bookshelf. Perhaps there is a dog nearby waiting for that walk in the park. Add a cell phone and maybe a lap top. There is pot of bubbling soup on the range or maybe a cake in the oven Put some sacred herbs in the spice cupboard and a pile of bills on the counter, held down by a handmade trinket from someone she loves. Now add a busy bulletin board to the wall. It is covered in photos of friends and family, and some greeting cards with nature images or art pieces she finds compelling (you might not recognize the meaning n all these images but she'll explain this if you ask). Add the odd poem or two. Look closer; there's a note reminding her about that rally/fundraiser/charity drive/PTA event she's organizing even though she said she was going to say "No" more often. There, I think we have it.

Note: Old Samhain
Old Samhain is the midpoint in the year between Autumn Equinox and Winter Equinox or Yule. A Cross Quarter holiday, Samhain occurs when the sun is at 15 degrees Scorpio; this year it is Nov 07, 2008.

Recommended Reading:
The Sabbats: A New Approach to Living the Old Ways by Edain McCoy

And there's the whole topic of male witches. Our culture seems to always show them as female.

I think all us pagans need to keep a sense of humor about this, good photos or bad. (love teasing the muggles anyway!). When we get too worked up how we're depicted, I think we come too close to being like those monotheists who rail against unapproved images of themselves and their god.

Those of us who stay with Witchcraft know that the cool/nifty/mystic/goth is one patchwork piece of the quilted fabric that is life as a Witch. I think there are a lot of us who are ready to be "Joe (or Jane) the Pagan" Now if only we could start communicating with one another...

I would recommend the article I wrote for the Witches Voices titled "In Praise of Pagan Men". I agree that we can get too "worked up", as opposed to thoughtful, on this issue. See my blog posts on Pagan humor for a relief from the self righteous victim view and the other cant that's out there.

Agreed. This is one thing that Full Circle did for many years in California. These days, I do that sort of networking on-line. You'll find that the best way to meet these sorts of Pagans is to a) find a group or cause in your area that you want to support with your time and effort b) show up c) look for the Pagans and Pagan-friendly folk already there. You'll find some, I promised. They may keep their heads down, but they are there.

To: Hacate:
Indeed. I think you've called it.

Definitely!!! I love your detailed description which calls to mind the Tshirts you find that say "This is what a Witch looks like."

Whether worn by a nubile maiden, a rounded mother, an aged crone, or a man of any age it still reflects reality.

But we do have to face the fact that a significant number of people who call themselves witches love this image; in fact, in their minds this image is what Wicca is about. It's all just a role playing game. A lot of them are traipsing about Salem this weekend dressed just like this. I'm not suggesting the need for an image police, but you must admit it's pretty hard to take seriously a religion which attracts folks like that.

For example, when it comes to dress, I notice that Governor Palin dresses to blend in with the mainstream while promoting a rigid, theocratic idealogy and behaving in ways that concern many of us (to say the least).

I believe I will hold to our right to dress up and have fun, while suggesting, as I have done here, that our image (among ourselves and to outsiders) can and should be more complex, varied, realistic and human.

For more on the subjects you mentioned please see these two articles at The Witches' Voice:

The Bard and the Poser

It's A Mystery: Dysfunctional Behavior and the Pagan Scene

Sia, had a chance to read your "Pagan Men" article, and I think you did a great job of touching on why some men are making Green Man, in particular, their role model. Our society and mainstream religions don't offer anything similar. No matter how close they come, they only go so far and leave something out. This is one reason I've embraced paganism--it seems more holistic and capable of celebrating our complete nature as men, not just part of it, while stressing that we are part of this world, not superior to it or set apart from it. That's the kind of man I want to be.

I hope to further explore Green Man as a role model. Thanks.

You are most welcome.

Thank you for the feedback.