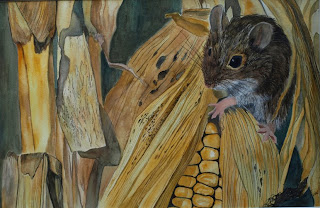 The BBC reports that:

A paper published in a Royal Society journal analyses the genetic make-up of house mice from more than 100 locations across the UK.

It shows that one distinct strain most probably arrived with the Vikings.

You can read more about this little adventurer at the link above.

Where ever we find mice, we find them linked with cats, whether it be in our ancient history or in the fables we tell our children. One of my favorite fictional cats teaches children about both. He is a magical talking cat named Gareth who appears in Time Cat, a book by Lloyd Alexander. Lloyd Alexander is the beloved author of fantasy who linked mythology with modern themes. When asked about choosing to write fantasy he said:

When asked how to develop intelligence in young people, Einstein answered: "Read fairy tales. Then read more fairy tales." I can only add: Yes, and the sooner the better. Fairy tales and fantasies nourish the imagination. And imagination supports our whole intellectual and psychological economy. Not only in literature, music, and painting spring from the seedbed of imagination; but, as well, all the sciences, mathematics, philosophies, cosmologies. Without imagination, how could we have invented the wheel or the computer? Or toothpaste? Or nuclear weapons? Or speculate "What if—?" Or have any compassionate sense what it's like to live in another person's skin?

...I don't mean to imply that works of realism haven't the same profound effect on young readers. Of course they do. More often than not, however, realism tends to deal with material of immediate, current interest; with, to use a word much overused, what is relevant. All well and good. But there's a difference between what is relevant and what is merely topical. The topical goes away after a while, to be replaced by the next fashionable subject; the newest literary disease of the month, as it were. The best fantasy it seems to me, is permanently relevant. Because it deals metaphorically with basic human situations, it always has something to say to us. Also, I think that fantasy offers a certain vividness and high spiritedness unique to itself. We shouldn't underestimate the value of sheer fun, delight, and excitement. In any art, boredom is not a virtue.

Gareth’s definitely not an ordinary cat. For one thing, he can talk. For another, he’s got the power to travel through time—

“Anywhere, any time, any country, any century,” Gareth tells Jason. And in the wink of a very special cat’s eye, they’re off. From ancient Egypt to Japan, the land of young Leonardo da Vinci to the town of a woman accused of witchcraft, Jason and Gareth are whisked from place to place and friend to foe.

Full of fun, excitement, and a good dose of history, here’s a fantastic tale that grabs the imagination and takes it far and wide, on the adventure of not one but nine amazing lifetimes.

For teachers & Parents: Teacher Resources & Lesson Plans on the work of Lloyd Alexander

Painting: Field Mouse by Canadian artist and teacher, Patti Hacult. More of her work can be found at the Independent Canadian Artist Online Studio.
Posted by Dj Connell at 8:53 AM