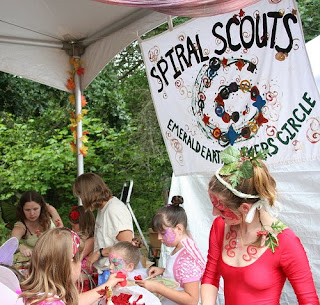 Today I would like to share a news video on Spiral Scouts. The California based station did a fairly good job job reporting this story, even though they clearly enjoyed using the world "witchcraft" in heavy quotes, more than once. So it goes. (1)

My compliments to the Fresno folks and the woman starting this group for representing earthwise values with dignity and grace.

That part of California is on the conservative side (well, conservative for California, anyway) and it is not the easiest place in which to be Pagan.

(1) Even though they stole a photo from a friend of mine, used it in the video (incorrectly I might add) and did not give her credit.

The news report was on a Spiral Scouts group based in California. My friend's picture shows a crafts booth hosted by an Oregon group at the Fairieworlds Festival in Eugene, Oregon.
Posted by Dj Connell at 10:15 AM