Apple Blossoms of the White May Moon 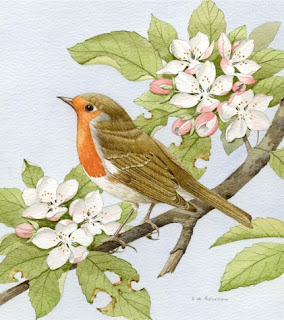 Apple Tree in May


"But it's falling already,
Falling!" I cried,
"So fast and so soon . . ."
The flowering bride
Of the white May moon.

My neighbor and I
Stood there by the door,
Petals floating down
For a moment more
On the green and the brown.

Then the boy at my side
Whom I hardly know
Said, "The petals leave"
(As he turned to go)
"But you mustn't grieve.

For they fall, you know,
To make the fruit
For the harvest moon:
Don't you be put out
So fast, so soon."

It was falling already,
Falling, my joy,
So fast and so soon,
When a country boy
Said, "The harvest moon . . ."


Beltane greetings to you and yours from the Land of Apples.

To our friends in the Pacific Northwest, see you at the Revels,

From Lunar Cycles and Goddess Energies:

Daughter of Hawthorn. She of the White Track. May Queen. Olwen is the Welsh aspect of the Greek Aphrodite, and is thus a Love Goddess and an Apple Goddess. In some Welsh traditions she is also considered to be the twin sister of Merlin (Merddin). She is affiliated with the letter H, uath, HAWTHORN. This period is of the year is considered unlucky, and was seen as a time of purification and chastity until the Ides of June (15th). The hawthorn blossom has a female scent, and was an erotic symbol. The Joseph of Arimathea story, contained in the Arthurian mythologies and created by the monks at Glastonbury, was used to discourage the orgiastic use of the hawthorn blossom by the Flora cults by attempting to sanctify it.

More than 7,500 varieties of apples are grown throughout the world.

About 2,500 varieties grow in the United States.

The apple variety Delicious is the most widely grown in the United States.

Apples are part of the rose family.

The science of fruit growing is called pomology.

Fresh apples float. That's because 25 percent of their volume is air.

Cut an apple in half, across the core, and you'll see a star shape.

It takes apple trees four to five years to produce their first fruit.

It takes about thirty-six apples to make one gallon of apple cider.

Poem by May Sarton - From the Selected Works of May Sarton published by W.W. Norton