Visit msnbc.com for breaking news, world news, and news about the economy

I admit it, I have a crush on Neil deGrasse Tyson. What can I say? I like funny, brainy guys with a flare for fashion, which explains why I married one. Here is Dr. Tyson on The Rachael Maddow Show. Check out his new show, The Pluto Files, tonight on 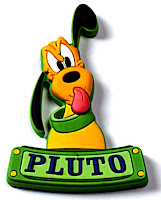 My current geek fantasy is dinner with Dr. Tyson, Rachael Maddow and Jon Stewart. My husband can come, too.

Update: In fairness to my fella and to balance out the table, I've added the witty and dashing Ana Marie Cox to the guest list.

By the way, Dr. Tyson is now on Twitter as is Ms. Cox.

Dr. Tyson is also a frequent guest on The Daily Show. Here is a list of his many video interviews with Jon Stewart. These two clearly like each other.

ooooh I wanna come to that dinner.