Morris: A Life With Bells On 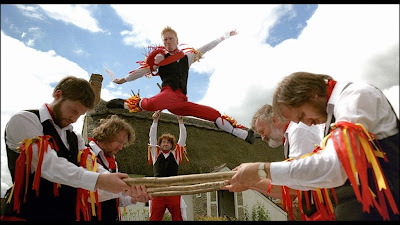 Watch the trailer at the link above and you'll see why I won't miss this.

The Times Online says this about the film, which premiers which opens in Seattle and premiers in selected movie theaters around the U.S. at the end of September.

Sir Terry Pratchett, the bestselling novelist, said in one of his Discworld fantasy novels, The Reaper Man: “The morris dance is common to all inhabited worlds in the multiverse. It is danced under blue skies to celebrate the quickening of the soil and under bare stars because it’s springtime . . .”

Morris dancing is that quintessentially English folk dance trotted out at village fairs and is apparently an underground urban sensation among young ladies who like bouncing about in corsets, bloomers and full skirts. (And who doesn’t?) The lucky men who learn the hanky waves and wear bells on their shins (similar to Jennifer Beals’s legwarmers in Flashdance) to partner them are very confident in their masculinity, and the women know it.

...So how to make morris dancing sexy to Englishmen? Charles Thomas Oldham is doing it in his new film, Morris: A Life with Bells On. Instead of ignoring the obligatory sneering of an English perspective, he has turned it on its ear and made a near-flawless first film that takes the mock out of mockumentary. Morris: A Life with Bells On explores the earnest peccadillos of quirky obsession, without losing the sincerity at the core of a morris dancer’s enthusiasm. The movie is a scripted documentary, created by a company of subtly comic actors who clearly grasp how ridiculous morris dancing may appear, yet perform with enough naive bluster to seduce us into the morris way of life.

By the end of the film you’ll be getting your hankies out and waving, not least because the excellent music score provokes a good jig — including the morris gangsta-rap song by Mr McTwist at the end.

All will be well, as long as they don't do the Dark Morris....

Beltane At The Baylands

Oh, I am so taking G/Son to see that. Never too young, you know.

It's so nice to hear from you again.