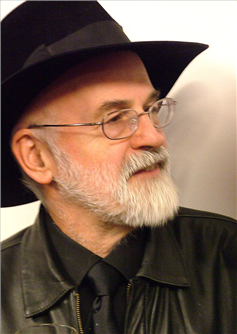 As of this writing, the North American Discworld Convention is SOLD OUT.

However, some people who bought tickets and/or hotel rooms cannot now use them, so, if you wanted to go but delayed a bit too long to buy your ticket, you might still have a chance. See the latest version of the North American Discworld Convention Newsletter for more details.

Programming notes are being added to the convention website as we speak. Check out the lovely page on the Seamstress Guild party being held in honor of Terry Pratchett. This party will take place on the Friday night of the convention and it looks to be the event of the season.

No special tickets are needed to attend the Seamstress Guild party but it is only open to convention members. So, I'll see the other 899 of you there.

P.S. For twitter updates on the party, go here