The Long Woman of Wilmington 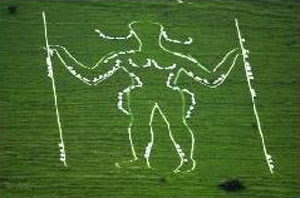 Well this has created quite a stir...

I laughed when I first saw the Long Woman of Wilmington. The world needs more grand sacred images of big, sexy curvy women, said I. Don't like the hair, though. Too cute. Try something shoulder length with bangs, something we can tie back. Seriously, have you been on that hill? The wind will knock you over....

Now...if the site was harmed in any way, that was, to my mind, another matter entirely.

I was less pleased to find that it was done for a silly TV Show as a joke and PR stunt. The ancient Sussex landmark was transformed by 80 women laying on the famous hill. Fascinating idea...What I don't like is the fact that this was done for a TV program and not for a good cause or to make a valid social or political point. Makes me think we missed a good chance here. If it had been the latter, I might have been there with them, after talking to the Druids, of course.

If I were to organize a women's protest, it would be near the site, not on it. The point is the image, yes?, not harming an ancient artifact.

Here is an example of a protest I very much admired: Hundreds strip naked on glacier.

But I digress...Here is the Druid's reply.

The Wild Hunt was following this story all along - here is their update:

Chalk figure controversy: It seems that the protests by British Pagans over what they felt were sacrilegious and damaging (temporary) alterations to prominent chalk figures has borne fruit.

“The Sussex Archaeological Society has apologised to protesters after they allowed a controversial stunt by ITV to give the Long Man of Wilmington a sex change. ITV and the archaeological society caused fury among Pagans and other protesters when they allowed fashion gurus Trinny and Susannah to add breasts and pigtails to the figure many believe is sacred. As part of the programme, Trinny and Susannah Undress, ITV asked woman dressed in white to lie on the figure to create the transformation. Chief Executive Office of the organisation, John Manley, said: ‘The Sussex Archaeological Society would like to apologise to representatives of the Pagan community, or any other individual or groups, who might have been offended by recent television filming on the Long Man of Wilmington.”

The Society has promised to consult with local Pagans before sanctioning any further actions involving the chalk figure. While pleased with this victory, some local Pagans also want to force ITV into not airing the prank footage at all.

“We are absolutely determined this footage should not be shown as we feel it will encourage anti-social behaviour on the site. We heard people say they were going up there directly after the filming as the activities seem to make people think it is ok an we are extremely concerned about this.”

One can be sure that thanks to these stalwart activists this will be the last time large numbers of women willing lay down near the Long Man of Wilmington.

What do you think?

The Long Man of Wilmington

Anger at Long Man Sex Change
Posted by Dj Connell at 9:53 AM

Historic sites should be safeguarded. If the photo stunt did harm the overall integrity of the site or artwork, then it should not have been allowed--even for a TV show!

At the same time, I don't think that icons, design, and illustrations are proof against human imagination or creativity. Being associated with a religious or spiritual significance doesn't armor an icon or an artwork against parody or playfullness.

It's possible that some of us Pagans take some icons and designs a little too seriously...or some such...a green man turning into a green woman could be funny...and in some Pagan Trads, it could be an illuminating insight...

It's difficult to know when and where to draw the line. I can see the humor in it, the feminism in it. If it wasn't Trinny and Susannah I would assume it was a protest or the like. I think it is their motive (What was it actually) or lack of it that bothers me.

I do worry that it encourages other folks to do things that might not be so temporary.

Dealing with the realities of family member thinking I'm a crazy pagan witch, I don't know how to go about protesting without harming ourselves and our cause.

I was stunned however that no one took the offered pamphlets. Are the women participating in the white suits so uncurious that they won't even check it out? I take christian pamphlets now and then to see if any thing has changed. I take other leaflets too, simply to keep myself educated. To participate in the stunt and yet have no curiosity about those who feel harmed by it, well, I find that to the most appalling of the entire thing. And the most telling about how the majority of our society really think, or don't think, as it were.