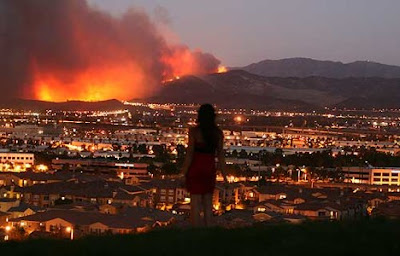 My thoughts today are with friends in California, those who have evacuated from the fires and those who might still have to do so. (1)

It's funny how different people think about these things. I've been wondering how many horses got out, and another concern has been for the many cats and dogs that roam trailer parks like the ones that recently burned down. These animals that live in trailer parks are sometimes pets, sometimes feral and sometimes held, as t'wer, in common, and they are thought of last in such situations, if at all. (As far as we know, there has not yet been a loss of human life - fingers crossed). Meanwhile, a dear friend and art lover is mourning all of the art, antiques and old furniture that has been lost in the lovely homes that burned in Montecito. These, too, are irreplaceable.

As the famous Northern Exposure episode once asked, "What do you save, the cat or the Rembrandt?"

Why Are These Fires So Bad?

Some of the issues here involve building materials and defensible space. This "perfect firestorm" was also created by climate change, specifically, the famous Santa Anna winds which came in this year at hurricane force (something rarely seen during the 32 years I lived in that region but which are becoming more and more common) coupled with an on-going drought and insanely stupid housing developments that sit far too close to wild lands. All this means that worse fires could yet be on the way: Jeremy Jacquot writes:

Parched grasses, when combined with warmer temperatures and strong winds, make for ideal combustion material. Indeed, according to a study published in Science in 2006, the number of wildfires since 1986 has quadrupled, and the area of forest burned has sextupled (when compared to the period between 1970 and 1986) -- the direct result, the authors say, of a spate of longer, warmer summers. Using a data set of past wildfire occurrences in the western United States, they calculated that the length of the active fire season has lengthened by 78 days and that the average burn duration of major fires increased from about 7.5 to 37.1 days.

......Though the future risk of wildfires may fluctuate as a function of a region's moisture, terrain and fuel supply -- indeed, a recent study published in Climatic Change predicted that wildfires could become more frequent in Northern California and less frequent in Southern California because of their differing topography and hydrology -- the larger problem, many experts warn, is that more and more cities are abutting wildland areas. This makes it harder for fire departments to commit sufficient resources toward both protecting homes and combating fires, something that became immediately apparent this weekend. (Of course, it wouldn't hurt if the Governator actually implemented all those fire reforms from the 2003 fires he has touted.)

A UC Berkeley report released this past week estimated the combined effects of climate change -- sea level rise, wildfires and other extreme weather patterns -- could cost the state $300 million to $3.9 billion a year (a figure that seems fairly reasonable in the wake of last week's destruction); the authors believe $2.5 trillion in real estate assets could be at risk. Even if the costs of mitigation prove equally high, it is difficult to argue with the authors' argument that the worst thing we could do now is to not do anything about climate change.

Right now there are concerns about the chemicals we use to fight fires and their effect on the environment. The NYT writes:

Retardant, whether released by small planes that sweep low through smoky canyons or by DC-10s in 12,000-gallon bursts, has become an increasingly common tool for fighting wildfires. Yet while many residents praise — and even demand — the use of retardant to protect their homes and neighborhoods, the potent mix of chemicals in the most common type can leave scars of its own, hurting watersheds and the fish and other animals that live in them.
Increasing concerns over retardant are prompting opposition to its use in certain situations and further stirring the debate in the West over how much is too much when it comes to fighting wildfires.
“It’s fairly well known that it’s toxic to aquatic organisms, to fish,” said Sue Husari, the fire management officer for the Pacific West region of the National Park Service. “In a lot of cases, we prefer to limit its use, but it’s definitely one of the tools we use.”

The LA Times has some of the best coverage, while Mashable lists 10 Different Ways to follow this news, including updates from FEMA and local maps, while blogging English Don Mary Beard offers a personal account.

The AKC's tips for protecting you and your dog in case of fire:

Alert firefighters about your dog.

A well-trained dog is also more likely to respond to commands, so that may be another good reason to keep working with your dog on his or her training.

(1) I am also holding the firefighters in my heart, including the husband of one dear friend who was called out from his fire station in Northern California to help fight the fires in Southern California. She is home, taking care of children and waiting for news. Love you, L. & M Hang in there.

What Turns Fires Into Disasters?

Photo: from Treehugger.com
Posted by Dj Connell at 7:25 AM

Great article - I worry about all the loose animals as well. As a resident of Malibu, and an amateur wildland fire expert, one thing which absolutely stuns me is the failure of some people in high fire areas to clear a defensible space around their homes. What can theyu be thinking? I saw coverage this weekend of homes starting to burn from Eucalyptus trees growing next to the outside walls of the homes.
The urban-wildland interface fire problem is going to become an insurance risk issue. The insurers will drive some protective measurers and people are going to have to start paying for their fire protection.
If your readers are interested, I have written a novel about wildland firefighters in CA called OneFoot In The Black.
Kurt Kamm
http://www.kurtkamm.com

Unfortunately, some people don't want to look at the root causes of these fires or inconvenient but perhaps effective ways of preventing them--and instead blame them on the Christian God's anger against the gay rights movement.