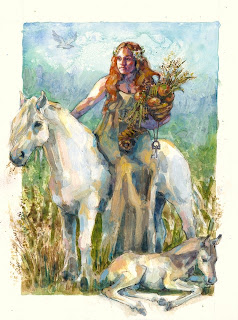 Blessings of the coming Summer Solstice to you and yours. I hope you have fun welcoming in the day. I know I will.

The Religious Tolerance website reminds us that this is day celebrated by people of many faiths and none. As such, it's one of my favorite holidays.

I always like to find a slightly different take on these well known holidays. Here are two such: Five Petal Rose wrote an interesting post on the Summer Solstice as a Holiday of Fire and Water while Blue Roebuck offers us a nice mix of Sun Goddesses as a means to reclaim the power of women.

Many believe the figure is a symbol of ancient spirituality and fertility and he has been used to advertise products as diverse as condoms, jeans and bicycles.

During WWII, the giant was disguised to prevent the Germans using him as an aerial landmark.

This area of England is blessed with abundant wildlife close to the giant (natch) and these insects, flowers, animals and birds are being studied and protected by the National Trust.

Of all the chalk figures, my personal favorite is the White Horse of Uffington. Note to horse lovers, the summer solstice is also known as the Feast of Eopna, who is the great Horse Goddess of the ancient Guals and is thus connected to Celtic tradition. Here are some photos from Loxley Abby of one such feast. On Macknac Island in Michigan this is also a time when the animals are blessed. The Gift Horse Gallery has a nice write up on Epona and a Pagan blogger named Anita offers a mantra for this day.

Speaking of animals, check out Take Your Dog To Work Day.

Endnotes: Some Solstice Myths and Facts:


The StarDate site tells us that:

Nabta: Circle in the Sand (also from StarDate) 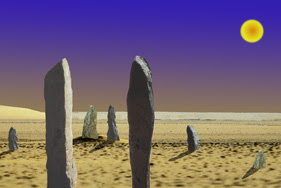 To the people of ancient Nabta, in the desert of southern Egypt, the summer solstice meant life. Soon after the Sun reached the northernmost point in its annual trek across the sky, monsoons brought precious rainfall. Not much rain, mind you — no more than four to eight inches a year, about the equivalent of the annual rainfall in Las Vegas or Phoenix. But for a few weeks, water filled shallow desert basins. Grass grew along the banks, providing fodder for cattle, and wells filled with enough water to sustain small nomadic tribes for the entire year. To help them predict and commemorate this life-giving event, the people at Nabta built an observatory — a 12-foot (4-meter) circle of flat stones, with four pairs of taller stones aligned opposite each other. Two pair provided a "window" on the solstice sunrise, while the other two aligned on an almost-perfect north-south axis

Illustration: From the StarDate site.

Ancient Alignments: Scientific American published a fasinating article some years ago on the research being done at Nabta, an site which contains the world's oldest astronomical observatory:

When the stones were erected, the area received enough rain in the summer monsoon for temporary lakes, called playa, to form. The site, built on the shore of one such lake. Radiocarbon dating indicates that Neolithic herders began coming to Nabta about 10,000 years ago. It was used periodically by nomads until about 4,800 years ago, when the monsoon moved southwest and the area again became arid.

At the height of its human occupation--about 6,000 years ago--Nabta supported well-established communities. One village consisted of 18 houses served by deep wells. Beneath the surface slabs of the largest megalithic structure was a sculptured rock resembling a standing cow. The team also excavated several cattle burials at Nabta, including an articulated skeleton buried in a roofed, clay-lined chamber. The late Neolithic occupants apparently used cattle in their rituals just as the African Massai do today, says Malville.

The Goddess Hathor is closely linked to the solstice. You might enjoy Solstice at Abu Simbel by Graham Raith at Two Camels. His post contains a very good description of a temple dedicated to the Goddess Hathor (note the cattle link again) & Ra:

At the solstices, twice a year, the dawn sunlight is aligned to light the entire length of the temple, lighting up three of the four statues, but never touching that of Ptah, the god of darkness.

If this "miracle of the sun" is the first miracle of Abu Simbel, the saving of the temples is the second. The building of the High Dam at Aswan meant that the original site would be flooded, and the temples lost under the waters of Lake Nasser. An international rescue effort was mounted, and the temples cut onto blocks and removed to their present, higher location, set into a concrete supporting bowl, and retaining the original precise orientation to preserve the "miracle of the sun".