Kiva and Microlending: Helping To Lift Others Out of Poverty 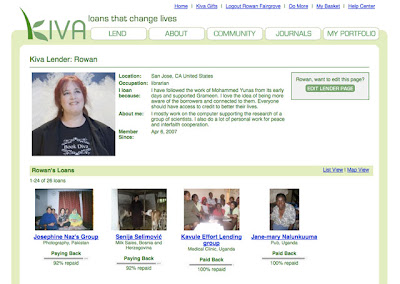 Librarian Bard, activist, and friend Rowan Fairgrove has written a post about her experiences with micro lending, offering small loans to poor people, most often women, in developing countries so that they can lift themselves out of poverty. Rowan is involved with an organization called Kiva, who's motto is Loans that change lives. I quote her post about her work with Kiva here in full and with her permission in honor of Pagan Values Month.

As you who follow my Live Journal know, I made my first Kiva loan in April 2007. My husband, Russell,

and I have supported the Grameen Bank for some time, so micro lending was a familiar idea. I heard about Kiva on NPR and the idea was very exciting to me. The ability to personally choose who to lend to - whether a baker in Afghanistan, a goat herder in Uganda, a farmer in Peru, a restaurateur in Cambodia, or a tailor in Iraq appealed to me. Just a small amount of money can put someone on the road to self-sufficiency. And as they repay their loan, you get your money back and get to lend again!

My first Kiva loan was to Tamara Orucova, a beekeeper in Azerbaijan. The plight of bees was much in the news at that time and I thought supporting a beekeeper sounded perfect. She repaid the loan in 12 months as pledged and I made two more loans with the money she paid back. Those were both group loans, one to a group of women poultry farmers in Uganda and the other to a group of women in Pakistan with various businesses. I also started a new loan to Senija Selimovic in Bosnia so she could buy a new cow, her third, to sell more milk.

A new kind of philanthropic giving
— particularly among the young and web-savvy —
is facilitated by a nonprofit organization called Kiva.
Donors are encouraged to give microloans
to entrepreneurs in the developing world.
All Things Considered - National Public Radio
Over the past two years I have lent over $1,000 and funded twenty-six loans. One of the things I love about the Kiva website is reading through the requests. I get a glimpse into the lives of people, especially other women, that I can help to lift themselves out of poverty. The challenges that people can overcome with a little help from Kiva lenders is very inspiring.

One woman makes her living buying salt in bulk and packaging it for sale by small groceries. She wanted a loan so that she could make a larger bulk purchase and so get a better profit. What could be more basic?

Another that I particularly remember was someone who made food that she sold at the crossroads to workers passing buy. The recipe had brains and other organ meats in it and sounded quite awful but the loan application said it was much sought after and she needed money to make more. That one was funded so fast that my donation wasn't accepted.

Being a Kiva lender has enriched my life and made me feel that I could make a difference to individual lives around the world. It is a blessing and a delight and I hope that you will join me in becoming a Kiva lender.

Info about the loans I've made can be found at my lender page - http://www.kiva.org/lender/rowan4140

Note: There is a "Wicca (neo)Pagan, Witches and fellows" lending team at Kiva. You can find it here.

Thank you, Rowan, for all you do for the Pagan community and for others around the world.

Editors Note: Kiva is now making loans within the U.S.

Rowan is very active with a Pagan organization call The Covenant of the Goddess
and she often gives classes and workshops at PantheaCon.

First, I am starting to celebrate the holidays by reading your blog - You do the BEST writing on the holidays anywhere on the web. Then I send it to my friend.

But I came here to ask you to pass this on:

I am urging all people, especially women, to wear green bracelets in solidarity with our Iran sisters and brothers – will you do it ? And tell others?