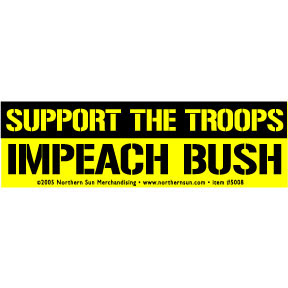 Dennis Kucinich, has called for the impeachment of George W Bush claiming that the president set out to deceive the nation, and violated his oath of office with the Iraq war.

The Ohio representative yesterday introduced 35 articles of impeachment against Bush on the floor of the US House of Representatives.

Kucinich unveiled a list of alleged illegal and improper acts by Bush, including war crimes.

Click on the link above to read the 35 points.

Is It Too Late?

Some people will argue that it's too late. I disagree. I would like to see proceedings move forward immediately, if only so we keep this President too busy to begin his next war with Iran.

Let Congress and the Senate Know Your Position On This Issue:

If you feel that the time is finally right, then call - don't email or write, but call - your representative today. If you don't know how to contact them, use this link and type in your zip code in the box titled "Find Your Representative"

Well At Least We Have Cheap Gas...

A BBC investigation estimates that around $23 billion dollars may have been lost, stolen or just not properly accounted for in Iraq.

For the first time, the extent to which some private contractors have profited from the conflict and rebuilding has been researched by the BBC's Panorama using US and Iraqi government sources.

A US gagging order is preventing discussion of the allegations.

The order applies to 70 court cases against some of the top US companies.

While George Bush remains in the White House, it is unlikely the gagging orders will be lifted.

To date, no major US contractor faces trial for fraud or mismanagement in Iraq.

For me, it is not enough to impeach this President. I want changes brought against his Vice President, as well. I want both of these men (and others in this administration) tried for war crimes and treason against the United States.

Sins of the Fathers:

Those who read history know that treason runs in the Bush family:

In 1933, Marine Corps Maj.-Gen. Smedley Butler was approached by a wealthy and secretive group of industrialists and bankers, including Prescott Bush the current President's grandfather, who asked him to command a 500,000 strong rogue army of veterans that would help stage a coup to topple then President Franklin Delano Roosevelt. According to the BBC, the plotters intended to impose a fascist takeover and "Adopt the policies of Hitler and Mussolini to beat the great depression.

The links between this family and the Nazi's have long been known but it is not something that is discussed in the American press.

Why Is My Government Behaving Like the German S.S.?

The Nazi's were great fans of water boarding and other horrific forms of torture. As a third generation German/American and as someone who's grandfather served in the German resistance and who's father fought in WWII in the American Navy, I am deeply offended that my own, free country uses the same techniques as the Gestopo:

On February 10, 1936, the Nazi Reichstag passed the 'Gestapo Law' which included the following paragraph: "Neither the instructions nor the affairs of the Gestapo will be open to review by the administrative courts." This meant the Gestapo was now above the law and there could be no legal appeal regarding anything it did.

Indeed, the Gestapo became a law unto itself. It was entirely possible for someone to be arrested, interrogated and sent to a concentration camp for incarceration or summary execution, without any outside legal procedure.

Justice in Hitler's Germany was completely arbitrary, depending on the whim of the man in power, the man who had you in his grip. The legal policy as proclaimed by Hitler in 1938 was: "All means, even if they are not in conformity with existing laws and precedents, are legal if they subserve the will of the Führer."

...Gestapo interrogation methods included: repeated near drownings of a prisoner in a bathtub filled with ice-cold water...

Japanese Generals and German officials were tried and convicted for these same crimes after WWII. One wonders what the next few years will bring.

Bumper Sticker from our friends at Northern Sun

(1) Not always. American soldiers commited their own share of rape, and war crimes, and let us not forget the bombing of Dresden.

Yes! This must happen. We need it for so many reasons.

First he must bear the humiliation and life changing opportunity an impeachment would afford him.

Second he must face the American people who he has shamed before the world and who he has lied to and betrayed.

He must not be allowed to walk quietly into the good night. There must be a record that will last through the ages that marks the end of his reign and the true feelings of the people he supposedly serves.