Stephen Colbert and the Pagans 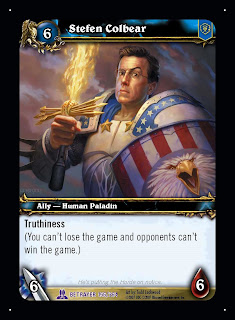 I posted this last year, but I am re-posting it to say:

Someone asked me the other day why I admire Stephen Colbert. Here is a good description of the man:

... an aversion to tyranny; advocacy of an unbridled free press; wry, homespun humor; humility, or at least the appearance of it, in dealing with others; idealism as well as realism in foreign policy; willingness to compromise; and tolerance of contrary views, particularly in religion. Such traits enhance social capital and should "distinguish America...in the messy struggles that confront a new century."
- Walter Issacson writing about Ben Franklin 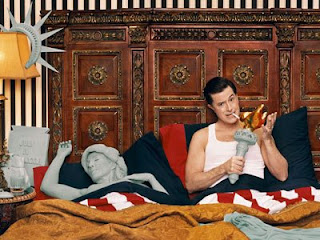 When Colbert was a student in Chicago, he studied improvisation with the legendary Del Close. Close was a personality so unpredictable that he has been called “the Ted Kaczynski of modern comedy”; before he died, in 1999, he bequeathed his skull to the Goodman Theatre, in Chicago. His hope was that he could play Yorick into eternity. As the artistic director of the ImprovOlympic, he had a legacy at least as memorable. “One of the great things about Del was that he was a pagan,” Colbert said. “When he was teaching, he would take out this pentagram necklace that he wore and flash it at you,” he continued. “I’ve been to my share of new-moon celebrations.

Give the writers what they want:

(sigh) I hate this writer's strike. I want my Daily Show. I want my Colbert Report. Oh, and I'd like my civil rights, back, as well.

Set some rules. Don't worry if the rule makes sense, the important thing is that it's a rule. Arbitrary rules teach kids discipline, if every rule made sense they wouldn't be learning respect for authority, they'd be learning logic.

Come on, folks! Pay the writers fairly for their work, and let's all get back to making fun of things, lest our eyes fill with so many tears that we can't see our way clear to make change.

The Daily Show Writers Explain the Strike To Us

Stephen's World of Warcraft card.
I don't happen to play, but I'm told it's well done.

Stephen with Lady Liberty found at the DaveandThomas blog
Posted by Dj Connell at 9:30 AM