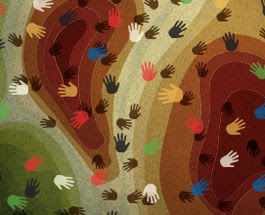 Today I would like to share some thoughts about an apology and what that has meant to an entire nation. Let us begin with the "sorry speech"; a recent speech of apology given by Prime Minister Kevin Rudd of Australia for the crimes committed by the Australian government towards the indigenous people of that country. These crimes include the forced removed of generations of indigenous children from their parents, their land, and their culture. (1) This is a statement his predecessor refused to give for over a decade. It begins:

That today we honour the indigenous peoples of this land, the oldest continuing cultures in human history.

We reflect on their past mistreatment.

We reflect in particular on the mistreatment of those who were stolen generations - this blemished chapter in our nation's history.

.....We apologize for the laws and policies of successive parliaments and governments that have inflicted profound grief, suffering and loss on these our fellow Australians.

Next I would like to share the reactions by indigious activist Dr. Anita Heiss and Gary Highland of AnTaR to that speech.
Mr. Highland wrote this in an article titled Why Sorry Must Be the First Step

It was a day many of us thought we’d never see and one none of us will ever forget...Prime Minister Kevin Rudd formally apologized to the stolen generations for the policy of forced child removal which damaged so many lives.

I expected the nation to exhale a collective sigh of relief after the apology, but it generated so much more.... Kevin Rudd’s sorry was followed by unbridled joy and celebration.

Rarely has an event in the national parliament been the centre of so many conversations in such positive terms. In the days after the apology people in petrol stations, supermarkets and pubs all around Australia wanted to talk about what it had meant to them.

When I picked up my morning coffee on the way to work a stranger came up to me and said he’d never really understood why an apology was important until he listened to the Prime Minister’s words...More significant than all of this was the burden the apology seemed to lift from so many members of the Stolen Generations and their descendents. The healing power of that simple word that took so long to say built the bridge of trust that the Prime Minister had hoped for.

Ms. Heiss said that many people contacted her that day, and that she felt there was A New Heart for Austalia:

Messages of ‘Sorry’ and ‘support’ started flooding in via sms and email on Monday. They reached a peak as the speeches ended yesterday morning and I stood amongst thousands on Parliamentary Hill, breathing in fresh air that was filled with hope, history, forgiveness and unity.

...While many of the people who contacted me don’t know each other, they had many things in common. Firstly, the group I am talking about were all non-Aboriginal. Secondly, they shared a common language that included terms like ‘sorry’, ‘healing’, ‘relief’, ‘justice’, ‘hope’, ‘peace’, ‘solidarity’, ‘renewed hope’, ‘there in spirit’, and ‘moving forward together’. These words were accompanied I’m told, by a lot of emotion, many tears and boxes of tissues.

I would like to leave you today with a speech given by Dr. Heiss for International Women's Day on what it means to be a contemporary aboriginal woman in Australia today. Read the whole thing, it's well worth your time.

The Sea of Hands: Add your name to support the rights of the indigenous peoples of Australia

An Australian Blogger's reaction to the speeches.

(1) Similar atrocities occured in this country. From Native American in the United States:

American policy toward Native Americans has been an evolving process. In the late nineteenth century, reformers, in efforts to "civilize" or otherwise assimilate Indians (as opposed to relegating them to reservations), adapted the practice of educating native children in Indian Boarding Schools. These schools, which were primarily run by Christian missionaries,[25] often proved traumatic to Native American children, who were forbidden to speak their native languages, taught Christianity instead of their native religions and in numerous other ways forced to abandon their various Native American identities[26] and adopt European-American culture. There are also many documented cases of sexual, physical and mental abuses occurring at these schools.[27][28]