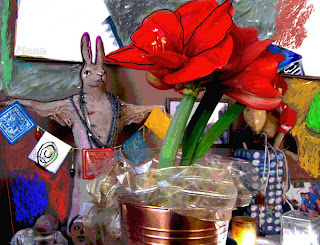 The very earth,
the seas the stars the skies,
springs, rivers, seas,
the brightness of our eyes
All will be manna to the hungry soul

Today I would like to share a bit of inspiration from the good people at Morning Earth. Their page on Artists/Naturalists Past & Present list two people I admire: Maria Sybilla Marin and the lovely hermit, Andy Goldsworthy.

Here is a video, taken from the documentary on his work titled Rivers and Tides.

Here also is some writing I found at Science Musings, a blog by Professor Chet Raymo. Let it be an antidote to all the current crop of bigotry and foolishness that clamors for our attention:

We are not other than God. We are part of the creation, part of the ineffable. Our eternal life, such as it is, consists in being part -- here, now -- of life eternal.

Our spiritual journey is not defined by up/down. We are not asked to despise the body. The goal is not some otherworldly "higher" life. Spiritual growth moves outward to embrace the cosmos and returns to self. Outward and returning, an endless spiral. "If people lived for a thousand years or even longer," says Eckhart, "they might still gain in love."

To the extent that we participate in the divine, we are creators, of art, of course, but also of justice and compassion. Eckhart's Trinity is being, knowing, and doing. We are not hobbled in our search by Original Sin; on the contrary, we are enabled by the blessedness of the creation of which we are a part. Pleasure -- bodily, sensual pleasure -- is part of the spiritual experience. Eckhart warns us (in Fox's words), never to trust a so-called spiritual person for whom laughter does not lie at the center of her spirituality.

I will leave you with his thoughts on poetry and science:

Motor....consider the use of the same word in describing a hummingbird in Mary Oliver's poem Hummingbird Pauses at the Trumpet Vine: "...and who doesn't want/ to live with the brisk/ motor of his heart/ singing/ like a Schubert..." Here the word has even less in common with the driving mechanism of the washing machine. A whirring. A breathlessness. The furious exhilaration of a heart in love, of ecstasy. This is the motor that drives the bow on the violin, the trill of the singer's voice. Here is a word that is wonderfully apt, yet so encompassing that it can embrace a Schubert. The poet speaks of a motor more intensely than the motor in a washing machine ever dreamed of being.

But Oliver's use of the word takes us nowhere toward understanding the amazing metabolism of hummingbirds; for that we need words trimmed close to the bone, words of closely circumscribed meaning, words that mean exactly the same thing to everyone who uses them, scientific words. The poet with her swishing, rustling metaphors will never discover that hummingbirds have the highest metabolic rates of any animal, a dozen times higher than a pigeon and a hundred times higher than an elephant. She will never know that in hovering flight a hummingbird's wings beat at an incredible 80 times per second or that its heart beats 10 times faster than a human's, or that to maintain these rates a hummingbird must consume nearly its weight in nectar daily, which requires visits to hundreds or even thousands of blossoms, or that an active hummingbird is never more than a few hours away from starving to death. Wouldn't the poet want to know these things? Wouldn't everyone?

Then, in knowing, the motors of our own hearts sing like a Schubert. Houses float up from their foundations. Bridges leap into the air like birds. Fountains gush hallelujahs. Gates fling themselves open to the world.

Blessed be your day,

Art: Final Mana. Professor Ramo writes, "For those who have come recently to Musings, Anne is my sister, who communes with her own computer in a sweet sun-powered adobe house on a secret mesa in the Southwest."

Mana: The stuff of which magic is formed