Give Me Enough Chocolate And I Can Rule The World 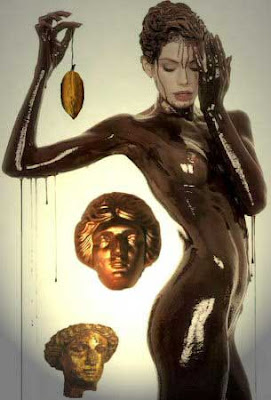 Now that I have your attention, I would like to remind everyone that tomorrow is International Women's Day. Click here for a list of events in your area.

Why not honor a woman who has inspired you with a bit of fine chocolate on this day? See some truly orgasmic chocolate links below.

Once strengthened, we can go out and promote our radical (?) feminist agenda. Fox News (?) warns us that:

According to it's website, IWD is a "global day connecting all women around the world and inspiring them to achieve their full potential." Back in 1911, the very first IWD was celebrated in order to campaign for such noble ideals as women's right to work, to vote, and to hold public office.

...Even media groups, such as CNN, the BBC, and Aljazeera TV have signed on as sponsors. Tomorrow, over 450 rallies and "events" are planned in 44 different countries across the globe.

"The radical feminists want to remake our laws in order to eradicate everything that is masculine from our culture and create a gender-neutral society," concluded Schlafly. "The United States should seriously reconsider lending its stamp of approval to future IWDs."

Does the fact that women are still used as slaves and sex captives not appear on your personal radar?

70 per cent of those living in poverty are female, as are two-thirds of all uneducated children and two-thirds of the world's illiterate adults. Eighty per cent of the approximately 700,000 people trafficked into slavery (including sex slavery) each year are female, and around 130 million women and girls are victims of female genital mutilation. Every year, 500 000 women die during pregnancy and childbirth and 68,000 die as a result of unsafe abortion.

That seems to be a cause that matters.

Scientist are trying to trace the origins of the original chocolate tree.

The cacao plant, or Theobroma cacao, evolved in the tropical rainforests of the Americas, but its origins remain something of a mystery. The species has been domesticated for so long that, like corn, it is now quite different from its wild relatives.

Since I can't offer you a tree, I will offer some of my favorite chocolate links:

Moonstruck: On-line store
If you are ever in the Portland area, visit one of their chocolate cafes.

Equal Exchange On-line store: Fair Trade Chocolate, Tea and Coffee
and do check out the link to their article on chocolate & slavery below.

Chocolate Dieties On line store
I'll have the 3/4 pound Green Tara in the dark chocolate, please.

The Chocolate Tree - Based in Edinburgh

Adults may care to purchase some special chocolate party hats. Check out the viking hat.
(My thanks to the delicious Brownie Points blog for pointing me to this site.)

The original tree may have been lost through human meddling. Typical.

...the fragrant, calorie-rich oils produced by wild Theobroma (the original tree) are what attract trapline bees, which have high energy requirements. But the hairlike structures that might have produced the oils are either vestigial or completely absent in most cacao cultivars. While breeding the plant to produce better chocolate, humans may have inadvertently destroyed the plant's primary means of attracting pollinators.

Efforts are now underway to improve the pollination abilities of modern cocao producing plants. All strength and honor to them. Give women enough chocolate and we can take over the world.

The Dark Side of Chocolate: Slavery and Chocolate Production

How To Taste Chocolate

The O'Mamma Organic Report notes that that many Dagoba Organic Chocolate products were recently recalled due to high levels of led.

Wikipedia notes that: The name "Minerva" is likely imported from the Etruscans who called her Menrva. In Etruscan mythology, Menrva was the goddess of wisdom, war, art, schools and commerce.

Her name has the "mn-" stem, linked with memory. See Greek "Mnemosyne" (gr. μνημοσύνη) and "mnestis" (gr. μνῆστις): memory, remembrance, recollection. The Romans could have confused her foreign name with their word mens meaning "mind" since one of her aspects as goddess pertained not only to war but also to the intellectual. Minerva is the Roman name for Athena the goddess of Wisdom and Virginity. She is also depicted as an owl.

The patriarchial Roman myths have her springing full grown from the head of Zeus. Earlier myths list her as the daughter of Zeus and the Goddess Metis, an oceanic Goddess, and the first great spouse of Zeus, who was, in fact, his equal. I think it's fair to say that in Menrva, we see the offspring of Mother Ocean and Father Sky. She is said to be the inventor of mathematics, language, poetry, the healing arts, and music. As 'Minerva Medica', she was the goddess of medicine and doctors, warriors, wisdom, commerce, and crafts. Ovid called "The Goddess of a 1,000 works".

All this is probably why the character of Professor McGonagall in the Harry Potter books has the first name of Minerva.