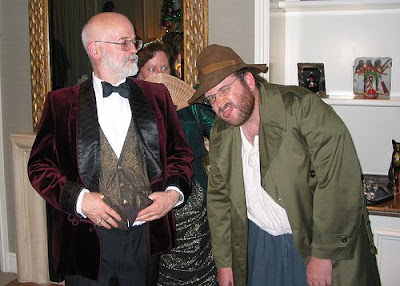 and now for something completely different...

His fans can make a donation in his honor here.

Discworld News quotes him as saying:

Part of me lives in a world of new age remedies and science, and some of the science is a little like voodoo, but science was never an exact science, and personally I'd eat the arse out of a dead mole if it offered a fighting chance.”

Back in February, he said this about his progress:

"I shall very soon be on medication that in theory should blow some of the cobwebs away and I hope my typing speed and accuracy will improve.

"I regret to say that I'm even cutting down on answering fan mail because my typing is so slow."

He has since begin that course of medication.

The Times Online Reports that:

He was found to have the disease three months ago and in a speech to be delivered at a charity conference in Bristol today, he is to announce his desire to “kick a politician in the teeth” over the patchy provision for sufferers and lack of investment in research.

He also talks movingly of how Alzheimer’s “strips away your living self a bit at a time”, depicting it as “a nasty disease, surrounded by shadows and small, largely unseen tragedies”. He said: “People don’t know what to say unless they’ve had it in the family.”

.... “I’d like a chance to die like my father did — of cancer, at 86. He talked to us right up to the last few days, knowing who we were and who he was. Right now, I envy him. And there are thousands like me, except that they don’t get heard.”

.... He takes “more supplements than the Sunday papers”, and compares remedies with a network of online advisers that includes university researchers and a witch. “It’s a good idea to cover all the angles.

When he asked about having his mercury fillings removed, he said: "There was a chorus of: 'Hrumph, no scientific evidence, hrumph… but if you can afford to have it done properly, then it certainly won't do any harm'."

....He described reacting to his diagnosis with "a sense of loss and abandonment (and a] violently coherent fury that made the Miltonic Lucifer, raging against Heaven, seem a bit miffed by comparison. That fire still burns. I want to go on writing. Admittedly, that means I have to stay alive. You can't write books when you are dead."

The BBC has this quote:

Rebecca Wood, chief executive of the Alzheimer's Research Trust, said the trust currently had to turn down two out of every three research projects due to lack of funds.

She said: "Whilst we were deeply saddened to learn of Mr Pratchett's diagnosis, we are delighted that he has chosen to speak out about his experiences with Alzheimer's disease, to raise awareness about its impact and the desperate need for more research.

"Research is the only way to beat this disease and help people like Terry - to prevent them losing their thinking skills and keep them doing the things they love."

The 59-year-old creator of the "Discworld" series said the number of people with the disease is expected to double within a generation and more money is needed to help find a cure.

.....Pratchett, who has sold tens of millions of books around the world, announced in December he has a rare form of the disease.

...Announcing his donation to the Trust, he said: "We need you and you need money. I'm giving you a million dollars. Spend it wisely."

Alzheimer's disease is the most common form of dementia, affecting around 700,000 people in Britain.

When his diagnosis was first announced last December, I wrote this:

I take comfort from the idea that Terry may, like Christopher Reed and Michael J. Fox before him, become a force for healing and hope to others who share this disease. Because of him, there may be much more medical research done now, more information will come out that will help more families, and more funding may come to those who are fighting this and/or caring for loved ones, which will benefit many, many people. He has the fame, the resources and the courage to be a force for good in this way if he so chooses.

As usual, Terry has stepped up to the mark. Well done, that man.


The Color of Magic

When he wasn't given money away, Terry attended the London premier of the TV production of The Color of Magic. (It will appear on British television during the Christian Easter season). As you can see from this video, Terry looks great and is in very good spirits. Friends of mine who attended this event tell me that a very good time was had by all.

You can watch the promo here.

As for me, I was delighted to hear that Jeremy Irons played Lord Vetinari. Terry has confirmed that Mr. Irons will play the ruler of Ankh Morpork in all future adaptions. Brilliant. The lovely Sean Astin played Two Flower, complete with Hawaiian shirt and tourist hat. There has been no announcement as to who played The Luggage.

The next adaption of a Discworld book for television by Sky One will be Going Postal.

Thanks to WitsEnd for the photo of Terry Pratchett, Mrs. Palm and Foul O' Ron at ConJose, and to Anna of The Seamstress Guild for several of the news links used in this article.

Pratchett and the Pagans