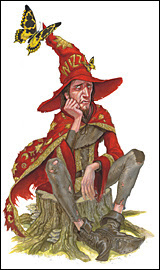 The Hollow Chocolate Bunnies of the Apocalypse by Robert Rankin

The Color of Magic by Terry Pratchett
This is the first book published in the famous Discworld series, and the first of the "Rincewind books" within that series.

Check out a Live Journal post by Yvonne Aburrow a while back titled Things We'd Like To See. I quite agree. Yes, indeed. That would be most helpful. Add a dragon that attacks spam (I want rending! I want fire!) and I'm in.

For those of you who don't know her, she is the author of several books on myth, magic, animals and trees.

Rincewind, one of my favorite Wizzards (and you know he's a Wizzard cause it says so on his hat) is about to appear on film. Terry Pratchett's book The Color of Magic will be brought to the screen by Sky One. Their rendition of Hogfather got good reviews, so we hope that this production will be as good. (They are throwing more money at this production, but we all know what that did to Pirates II and III. (1) Alas, this presentation of The Color of Magic, like Hogfather before it, will only appear on British TV. American fans will have to watch the DVD's.

David Jason will appear as Rincewind. Most of the actors appearing in these productions are, naturally, from the UK, however; it is rumored that Steve Carrell might play the character of Twoflower, a hapless tourist.

Mr. Carroll is best known for his work on television in The Daily Show and The Office, as well as for his movie roles in The Forty Year Old Virgin and Little Miss Sunshine. At this point, the rumor is unconfirmed and may well be little more than wishful thinking on the part of U.S. fans. Personally, while I love Steve Carrell (in particular, I admire his darkly funny and very sensitive portrayal of the suicidally depressed Proust scholar in Little Miss Sunshine), I would prefer to see an Asian actor playing a part of an Chinese character.

For more on this issue read Hollywood Yellowface, an article at the Bright Lights Film Journal webpage.

(1) and once again the cry goes up to the heavens from Pirate fans, "With all that money yer spend'n, why don't ja hire a writer!? Arrrggggh!

Happily, in the case of the Discworld series, they have one of the better ones.

Art: Rincewind with Quantum Butterfly by the amazing Mr. Paul Kidby. Check out his website for Discworld images and t-shirts.
Posted by Dj Connell at 4:49 PM