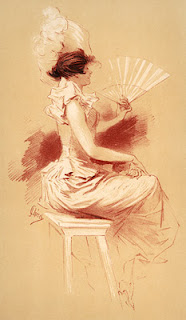 It's Official: The first ever North American Discworld Convention will take place over Labor Day Weekend in 2009 in Phoenix, Arizona. The Seamstress Guild - of which I am one humble, bustier wearing member - has been asked by Himself to host another of our notorious Seamstress Guild parties at this event. We said "Yes!" so fast, it blew his hat off.

As of this writing, Terry plans to attend both the Discworld Convention in England in 2008, (1) and this new one in the U.S. in 2009. (Update on Terry's Health)

Preparations for food, costuming, decorations, et al are underway at the Guild Yahoo site and through the various Convention Committees. (If you've even been involved in a large convention, you'll know why it takes two years to plan. I know several of the the folks who are organizing this one. They are experienced, organized, creative folks who will do a very good job). Meanwhile, my friends and I plan to use this opportunity to tour the American Southwest. We will spend that weekend in Phoenix attending the convention, and enjoying the great music clubs in that city. My husband and I plan to take vacation time for this trip, overall, assuming our work allows for this. I've always wanted to see the high desert in Arizona, and we may try for visits to Sedona and Taos, as well. Any place that has Southwestern cuisine, art and music, not to mention so many beautiful gardens and sacred, natural places, is my idea of a good time. As much as I love the Pacific Northwest, it will be good to walk through fields of sage and manzanita again. I want to hear doves and mockingbirds sing, and breath in the heady scent of pine trees. I want to watch the sunrise over Red Rock.

I may organize a Pagan meet at this Con. Goddess knows, there are enough Pagan Pratchett fans...it could be fun.

For more on the Guild's Background in the Discworld Novels, go here.

Xcentricities
I love these corset makers. They were a strong supporter of our Witches Ball for many years, and can often be seen at PantheaCon.

Pratchet and the Pagans