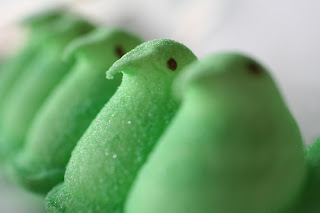 And now for some Saturday silliness:

Peeps II has been unveiled, and you can vote for your favorites among the 37 finalists.

If anyone is asking, my favorites are the Egyptian Peeps, The Peeps Camping, the Michelangelo Peeps and the Star Trek Peeps.

You can read about the first Peeps Show at the Washing Post and here are some of the entries from last year.

He knew he'd gone over-the-top when he spent $16 on Swarovski crystals for a woman made of marshmallows.

"After that I stopped looking at the receipts," says Johnston, a freelance graphic artist and photographer.

The money and time (two weeks) paid off. We were rendered speechless by the diorama's meticulous craftsmanship -- from Marilyn Monroe's sculpted hairdo (made of clay), to her curve-hugging pink papier-mache dress (her rump is made of a whole Peep), to the fine details of the tuxedoed Peepmen, each made of 61 pieces (their toes are coat hangers bent into L shapes, taped onto a dowel and coated 15 times with liquid spackling compound).

..."It's something I see and never think to buy or eat," Johnston says of Peeps, which he now realizes are "delicious." "It was just a total challenge."

Next year, I'd love to see some Pagan themes among the entries. Think what you could do with a Beltane theme.

Peep Research
for the science minded

All About Peeps at Wikipedia
Where you can read about Peep Jousting Games, Peep Viking funerals and other Peep Lore.


Photo of Peeps by NoNo Joe at Flickr
Posted by Dj Connell at 9:21 AM