Change - For These Women, It's Personal 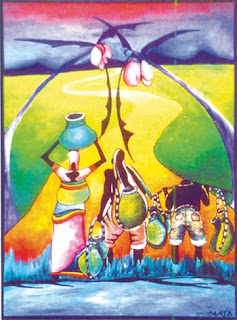 We are not the only ones hungry for change. From the BBC

In better days, many of these women led very different lives - among them a policewoman, a soldier, and a bank official.

Now they huddle in the doorway of a brothel in the downtown area, waiting for customers.

"I feel a very deep pain just to think that I was once a businesswoman," Maria said.

"And now I am a mere prostitute. Can you imagine?

"I ask God to forgive me and just to give me something, so that my kids will have something to eat.

Ask Zimbabweans scraping a living in neighbouring Zambia how they intend to vote in Saturday's elections in their homeland, and many will give you the same reply: "For change."

As in other countries we could name, incompetence, poor planning, arrogance, old grudges and greed are part of the problem. From a Daily News Editorial titled Man-made ruin in Zimbabwe

It's hard to see what more Zimbabwean President Robert Mugabe could do to ruin his country, but the relentlessly incompetent strongman still had one more trick up his sleeve, one of the few in that forlorn country that isn't tattered and threadbare.

Unemployment is 80 percent. Inflation is over 100,500 percent. The Zimbabwean dollar has been trading at a rate of 25 million for one U.S. dollar.

Returning to the capital of Harare where he was once based, Toronto Globe and Mail correspondent Michael Valpy wrote, "The former gem of Africa, once prissy in its orderly efficiency, is now sinking into a rank detritus of uncollected garbage, potholes, broken traffic lights and collapsing public services."

Zimbabwe's descent from prosperity began in 2000 when Mugabe ordered the seizure of white-owned commercial farms, the economic backbone of the country. The farms went largely to Mugabe's cronies rather than to black farmers who might have made a go of them.

Aids is also a major factor. From Development Outreach: (1)

Currently, there are close to a million orphans of AIDS in Zambia alone, an especially disturbing fact given that Zambia has a population of only 10 million. in certain major cities up to one in three adults is infected. In 2001 alone, an estimated 120,000 people died of AIDS-related diseases.

from the BBC article:

Maria has more reason than most to feel bitter about where Robert Mugabe has led his country.

Once the proud owner of a hair salon, she now works as a prostitute - driven to this by hunger, poverty and the need to support her family.

"She passed away in December," she said. "She needed a lot of food and I had no food.

"She was getting some treatment for TB, but the hospital had no blankets, and no food to give her.

I asked Maria if she had a message for her President. Her reply was swift: "Please just retire."

Here's to change for the better, both here and abroad.

Shop for Fair Trade Products from Zimbabwe
(Note: Full Circle is not allied with this company, nor have we received any products or funds for this link. As always, shop with caution and common sense)

(1) People making their own change (from the Development website)

...Many people are responding to the problem in innovative and effective ways. The Kwasha Mukwenu (Help Your Neighbor) group, in one of the poorest compounds of Lusaka, the capital city, is one of hundreds contributing to the fight against the impacts of AIDS. Twenty women engage in income-generating activities, such as tie and dye, and baking, and receive donations to provide schooling, food, and medical assistance to over 2000 orphans in their community. Another project, Mulele Mwana (Look after the Child), teaches skills including tailoring, carpentry, and computing to orphans who have to drop out of school and, like Kambole, have to care for themselves and their siblings. The Ipusukilo (Where You Can Be Saved) project on the Copperbelt provides alternative-to-sex-work sources of income to young women, many of whom are struggling to head households.