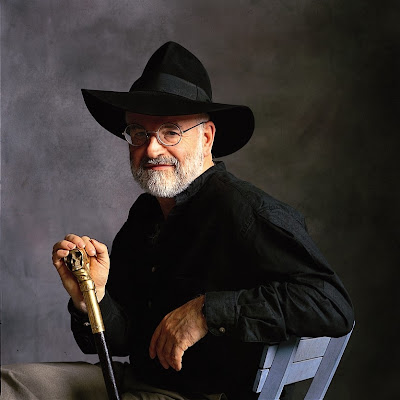 I would have liked to keep this one quiet for a little while, but because of upcoming conventions and of course the need to keep my publishers informed, it seems to me unfair to withhold the news. I have been diagnosed with a very rare form of early onset Alzheimer's, which lay behind this year's phantom "stroke".

We are taking it fairly philosophically down here and possibly with a mild optimism. For now work is continuing on the completion of Nation and the basic notes are already being laid down for Unseen Academicals. All other things being equal, I expect to meet most current and, as far as possible, future commitments but will discuss things with the various organisers. Frankly, I would prefer it if people kept things cheerful, because I think there's time for at least a few more books yet :o)

PS I would just like to draw attention to everyone reading the above that this should be interpreted as 'I am not dead'. I will, of course, be dead at some future point, as will everybody else. For me, this maybe further off than you think - it's too soon to tell. I know it's a very human thing to say "Is there anything I can do", but in this case I would only entertain offers from very high-end experts in brain chemistry.

The rest is at the link above, courtesy of Sandra Kidby of PJSM Prints.

I had early word of this because I am part of the Seamstress Guild, a group that will hold a special party for Terry at the very first North American Discworld Convention in 2009. This is something we have done for him before, and we are looking forward to it. As of this writing, Terry plans to attend this convention.

I saw him two months ago, and he looks and sounds the same as ever.

Our thoughts and good wishes are with him.

Pratchett and the Pagans

Wren just posted the news over at Wren's Next at The Witches' Voice. This will hit people hard. I've posted there today to remind folks there that he is not a figure of pity:

I've known him for over a decade and he's a brave and happy and good hearted man, who has a great deal of love and support around him, and I believe, as he says, that there are many more books to come.

For anyone who loves and admires this man, this is horrible news. But, please do not treat him any differently when you see him. He is, as he says, allergic to condolences, and offers of help are appreciated but not really useful unless one has the cure.

For what it's worth, I got a chance to visit with him a few months ago, and he looks and sounds the same. Remember, they caught this very early, and there is always hope.

FYI: am part of the Seamstress Guild, a group that is organizing a party in his honor at the first North American Discworld Convention in 2009. As of this writing, Terry intends to be there. Either way, the Con will take place. We are told that his book touring schedule may change over time. The good news is that he is taking care of himself and he does not intend to become a recluse.

By the way, if you feel you want to do a ritual for him, I would suggest that it be done for highest good and leave it at that.

I take comfort from the idea that Terry may, like Christopher Reed and Michael J. Fox before him, become a force for healing and hope to others who share this disease. Because of him, there may be much more medical research done now, more information will come out that will help more families, and more funding may come to those who are fighting this and/or caring for loved ones, which will benefit many, many people. He has the fame, the resources and the courage to be a force for good in this way if he so chooses.

So lets keep him and his family in our hearts and thoughts this Hogswatch Eve. Let's share the books, and watch the videos and stay as cheerful as we can. I don't believe he would want anyone to count him out just yet or, gods forbid, treat him as in invalid. He's still Terry.

Regards to all here,