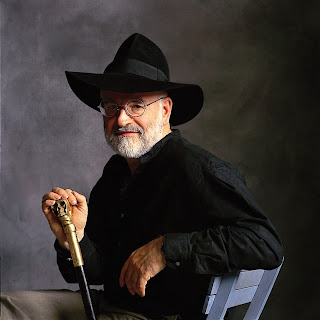 Pratchett fans will enjoy this video of Terry Pratchett speaking at the 2007 National Book Festival hosted by the Library of Congress.

Foresthouse has written about this event and her dinner with Terry Pratchett and friends afterwards in a post titled His Beard Is Longer In Person.

If you are wondering where to start reading any of the 30+ books that comprise the Discworld oeuvre, the good folks at LSpace have created a Discworld Reading Guide. It puts the books in order by series and in chronological order. This guide comes in a variety of languages and formats.

UK fans have long enjoyed a wonderful Discworld Convention, not to mention various DW meets and events, and now American fans will soon have a convention of their very own. A group of hardy Librarian souls is working to organize this event, scheduled for Labor Day Weekend in Phoenix Arizona in the year 2009. Visit the website for the first North American Discworld Convention for more information or to offer your services.

For inside information, visit the LIve Journal site.

Given the state of the world today, this might be a good time to read Good Omens: The Nice and Accurate Prophecies of Agnes Nutter, Witch, a book Terry co-wrote with Neil Gaiman. If you need a laugh (and these days, who doesn't)? this will do the trick. Or check out Terry's new book titled Making Money.

Terry Pratchett published his first story when he was 13 and had his first commercial sale four years later. He is the author of the best-selling Discworld series that includes The Colour of Magic (1983) and Making Money (HarperCollins, 2007). The author of two science fiction novels and seven books for younger readers, his novels have sold more than 45 million copies worldwide and have been translated into 27 languages. He received the British Fantasy Award for best novel (1989) and was named an Order of the British Empire (for services to literature) in the Queen's Birthday Honours of 1998.