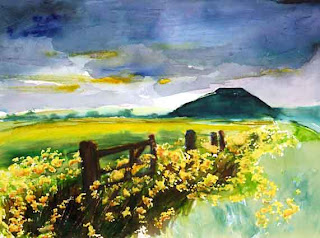 Ancient sites in Britain are under threat from recent floods. The Gardian Unlimited reports that:

...archaeologists and engineers were engaged in urgent discussions on how to save Silbury, after the torrential rain caused further damage to a structure already weakened by earlier floods.

....Silbury is not alone. As well as the human tragedies, the floods have been washing away thousands of years of history, across a swath of central and southern England. Silbury has been unmissable for millennia, but in Hereford, rain has been scouring away parts of a mysterious structure uncovered only a few weeks ago: the Rotherwas Ribbon, a serpentine path surfaced with deliberately burned stones, winding up a shallow hill - slap in the path of an unpopular new road plan.

They know not and will never know
That our full script is not confined
To that stone space, but stands deep lined
Upon the landscape high and low
Wherein She makes such worthy show.
Here's to all the wild and Pagan places and those who protect them.

A Guide to the Stone Circles of Britain, Ireland and Brittany

Stone Circles: A Modern Builders Guide to the Megalithic Revival

Poem: excerpt from Sacred to the Memory by Thomas Hardy (with some changes by yours truly).