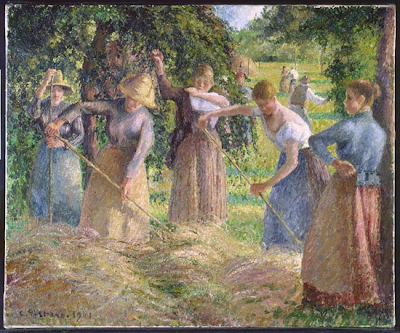 Blessed Lughnasa to you and yours.

Some Pagans celebrate this holiday at the beginning of August. Some Circles, mine included, choose to celebrate Lughnasadh AKA Lughnasa Old Style AKA Lamas closer to the middle of the month and over a period of several days. Some celebrate around the dark or full moon or according to astrological charts. The choice is yours.

Bernadette Cahill has written an excellent article on this holiday for the High Country News. She notes that:

Lammas means "loaf-mass,” marking the day loaves of bread were baked from the first grain harvest and offered at church altars. In Celtic lands, it was a feast associated – with conflicting details – with Lugh, the god of light, at the point when the amount of light reaching the northern hemisphere begins significantly to decline.

The four great fire festivals follow each other in the wheel of the year at fairly regular intervals – around 12 weeks or so and more or less midway between the solstices and the equinoxes. This timing, the role of the god of light, and the lighting of fires, all point to a connection with the solar year – and Lughnasadh is often described as part of the wheel of the solar year.

But some authorities say it’s actually one of four lunar festivals that alternate with the solar festivals. Fire lighting up the darkness of the night – like the full moon does – and the ancient Celtic name, which sounds like “lunacy” – indicate this may be correct.

The real question is this:

What is your harvest, and how are your sharing those gifts with others?
Sia

Art: Hay Harvest at Eragny by Pissarro
Posted by Dj Connell at 6:35 PM