When Holocaust survivor Renée Duering told her life story to an oral historian in 2008, she made sure to include a message to her long-lost childhood friend:

“I have not seen or heard from Margot since 1934,” Renée said. “If you are alive, Margot, and somehow you read this, I would like to find you.”

The plea was tantamount to a message in a bottle. After 75 years, what were the odds that Margot would still be alive even if she had survived the Holocaust? That she would actually see Renée’s 23-page online history? That the two women would be healthy enough to reunite?

Yet last week, in an emotion-packed moment at San Francisco International Airport, the long-lost childhood friends reunited — after an odds-defying Internet hookup, after 7½ decades apart and after 88-year-old Margot traveled all the way from South America.

- the rest of this compelling story can be found here.

The March of the Living Honors Poland's President & First Lady

The 10,000 or so people from around the world attending the annual March of the Living walked the stretch of about 3 kilometers (2 miles) between the red-brick Auschwitz compound and the death camp’s wooden barracks section of Birkenau.

At least 1.1 million people - mostly Jews - died in the gas chambers at Auschwitz or from starvation, disease and forced labor at the camp that German Nazis built in occupied Poland during World War II, which was only liberated at the end of the war in 1945.

Many in Monday’s annual march also wore black arm bands or carried black ribbons in memory of Poland’s President Lech Kaczynski and his wife, Maria, who were killed in a plane crash Saturday along with 94 others en route to WWII-era observances in western Russia.

Israeli Ambassador Zvi Rav-Ner read out a message in Hebrew, English and Polish saying this year’s marchers were also paying homage to Kaczynski and the other plane crash victims.

Lech Kaczynski and his wife were friends of the state of Israel and of the Jewish nation. Today we will march in solidarity with the entire Polish nation, Rav-Ner said while standing by the infamous gate with a sign reading Arbeit Macht Frei, or Work Makes You Free.

Speaking as a German-American, a Feminist and as a Pagan Woman:

My thoughts today are with those who remember that Jews, gays, gypsies, the disabled, feminists, African-Germans, rebels, thinkers and artists were destroyed by the Nazis and those who supported them.

I am German-American on my mother's side, and I grew up with 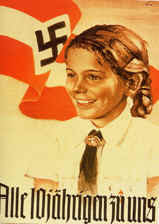 relatives who had been forced into the Hitler Youth as early as 10 years old. My great-grandfather was a member of the German resistance and helped American and other pilots shot down over Germany escape through the underground. When my mother was in college some of these servicemen managed to find my great-grandfather (who was then living in the U.S.) in order to thank him for saving their lives. For this and other reasons, I dislike anyone (right or left) who carelessly calls someone they disagree with a fascist or compares their political opponent to Hitler. Those of us who study and respect our history do not use these terms carelessly for cheap political talking points. Such fools are beneath contempt.

Nor do I have much patience with Pagans and feminists from the far left (1) who like to claim that 9 million women were burned as witches as if we somehow could "win" a pain contest. For once and for all, that number is false:

For many years and in dozens of books and articles on witches and Wicca, the number of innocent people executed for the practice of witchcraft during the four centuries of active persecution has been estimated as high as nine million. In 1999, Jenny Gibbons released the results of her research in the autumn issue of PanGaia in which she verified that overall, approximately 75 percent to 80 percent of those accused of witchcraft were women, but to date (circa 1999) an examination of the official trial records of the witchcraft trials indicate that less than 15,000 definite executions occurred in all of Europe and America combined. The period of the heaviest persecutions of witches occurred during the 100 years between 1550 and 1650, Gibbons reported, and the total number of men and women accused of witchcraft who were actually hanged or burned probably did not exceed 40,000.

Wiccan author and scholar Margot Adler has noted that the source of the oft-quoted nine million witches put to death was first used by a German historian in the late eighteenth century who took the number of people killed in a witch hunt in his own German state and multiplied by the number of years various penal statutes existed, then reconfigured the number to correspond to the population of Europe. "It serves no end to perpetuate the miscalculation," Adler commented. "It's time to put away the exaggerated numbers forever."

The real numbers are bad enough, we don't need to inflate them to make a point.

Let us remember our history, our real history, so that when it comes to events like the Holocaust and The Burning Times we can say this and and support it: "Never Again".

The text reads "Every girl belongs to us" and they meant it.

Mothers in the Fatherland: Women, the Family and Nazi Politics

Despite what appears from a modern perspective to be a misogynistic approach to the "woman's question," the Nazi movement managed to appeal to large numbers of German women by exploiting their antipathetical reaction to the vocal women's rights movement and their negative perceptions of the late Weimar era. The Nazis tapped, among women as well as men, deep sentiments of nationalism, anticommunism, and disdain for democracy. Though the Nazis proscribed women from national politics and made careers in the professions difficult, the movement succeeded by ascribing to women their own sphere of traditional domestic and social service activities. Koonz's impressive research and lively writing provide a fascinating account of the leaders, organizations, and contributions of women in the movement.

It's dated, of course, but it still holds up.

Director Stanley Kramer's socially conscious 1961 film tackles the subject of the war crime trials arising out of World War II in an earnest and straightforward fashion, exploring the consciousness of two nations as they struggle to come to terms with the aftermath of the Holocaust. Spencer Tracy plays the American judge selected to head the tribunal that will try the suspected war criminals. As he sets about his task, he must confront the raw emotion felt by the German people, and his own notions of good and evil, right and wrong. Regarded as a classic, this stark rendering of one of the most pivotal events in the 20th century features a stellar cast including Burt Lancaster, Montgomery Clift, Marlene Dietrich, a young William Shatner, and Maximillian Schell, who won an Oscar for his role as counsel for the defense for those charged with crimes against humanity. Judgment at Nuremberg is important viewing not only for the history of film, but for the history of modern times. --Robert Lane

Who Burned the Witches?

Teacher's Guide: Victims of the Holocaust

(1) The New York Times notes that:

In the United States, the nine million figure appeared in the 1978 book "Gyn/Ecology" by the influential feminist theoretician Mary Daly, who picked it up from a 19th-century American feminist, Matilda Gage.

It was also used by a (non-Pagan) 1970's radical feminist guerrilla theater group called W.I.T.C.H. The founders later admitted that they use it because they simply wanted a number that exceeded the Jewish death toll in order to shock people into awareness of "The Women's Holocaust".