Good News for the Florida Panther 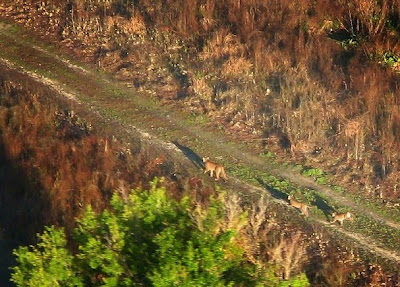 A rare photo of a Florida Panther and her cubs
taken by Biologist Darrel Land
I thought you might enjoy some good news today:

A rare photograph taken last month of a Florida panther and her two kittens is making the e-mail rounds among wildlife biologists and conservation partners who have toiled for decades to restore the big cat’s habitat.

...Picayune Strand, a 55,000-acre chunk of the Everglades, was drained and partially developed decades ago to build a subdivision. The development failed, and over the years the state and federal governments spent $150 million to purchase the land lot by lot. State and federal biologists consider the Picayune Strand an essential piece of remaining panther habitat, connecting other public lands that include the Florida Panther National Wildlife Refuge, Everglades National Park and Fakahatchee Strand Preserve State Park. Since the early 1990s, when the Florida panther was on the brink of extinction, the population in the wild is still less than 100.

Work is now being done to restore water to the area.

Congratulations and best wishes for everyone who made this possible. You must be so proud.

Note: The young of large cats are called "cubs". The term "kittens" is used for smaller cats.

Information on the Restoration Project and the Everglades Plan

Wow what a beautiful picture to see. Love to hear about this kind of work