T'was Ever Thus OR Hey, Baby! 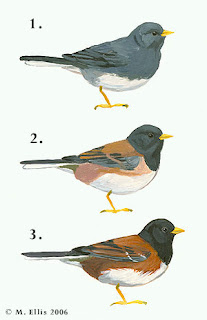 Today I would like to share this enlightening note from Sex and the Dark-eyed Junco care of the National Wildlife Federation. (1)

A team of scientists ...have discovered that males with higher levels of testosterone—no matter what their age—are irresistible mates for older, more experienced females. They also produce more offspring.

But there’s a catch: The scientists also discovered that these these testosterone-pumped studs are not particularly good fathers, and their offspring are born smaller and die at higher rates. The hormonally charged birds are so eager to show off and chase after new partners that they don’t visit or bring food to their nests as often as their less popular rivals.

In an earlier study, Ketterson found that the über-juncos tend to die at a younger age. Not only does elevated testosterone make them less wary of predators, it also increases their stress levels...

To quote a gentleman of my acquaintance, "I could not possibly comment".

Tell Me You're Kidding

Humans seem cruel enough for anything but finch fighting? Really? Most of the men involved were from Brazil where finch fighting has been banned for decades. I believe in the rule of law but don't you just wish we could throw these folks in the Thunderdome and see how they like it?

Congratulations to the town firefighters who discovered this obscene set up.

Lest we take this too lightly, Annie Harnett at Change.org reminds us of the well known link between animal abuse and child abuse.

In other bird news, scientists think they have found a way to extract DNA from ancient egg shells. This means that elephant bird Aepyornis, the heaviest bird in existence (no surprise that design didn't last), may be coming to a zoo near you in, say, 2040. Sadly, by then the kids will be asking, "Mommy, what's a tiger?"

Art: Found at a useful article for birders titled Do You Know Your Dark Eyed Juncos? from the Birding in Sonoma County blog.

(1) Adapted from "The High Price of Being a Hunk" by David Lukas, National Wildlife, February/March 2009.