Sinead O'Connor has called for a Catholic boycot to protest years of sexual abuse of children and the cover-up that followed by priests in Ireland and those in charge at the Vatican. I recommend watching the video of the interview she gave to Anderson Cooper on this subject (via that link). The oath the young boys were made to take not to reveal their abuse is chilling.

O'Connor's remarks, part of which I quote below, are honest, heartfelt and, I think, balanced, given the fact that she herself is a survivor of both church and child abuse. (1)

I’m a Catholic, and I love God,” she told The L.A. Times. “That’s why I object to what these people are doing to the religion that I was born into.”

...Speaking to Anderson Cooper on CNN this week, Ms. O’Connor argued that church policies were the problem. She pointed out that the man who now leads the Catholic Church in Ireland personally swore to secrecy two children who were abused by a priest in the 1970s, and was, as he has said, following the rules at the time. She also denied that she was anti-Catholic but said she felt let down by the leaders of the church.

Personally I would say I am a Catholic woman. I am proud to be a Catholic woman. I separate, sometimes, the difference between God and religion. I’m passionately in love with what I would call the Holy Spirit. I don’t believe it matters if you call it God, Buddha, Krishna, Jesus, Fred or Daisy. It’s the Holy Spirit, it doesn’t matter. But what I would like to see as a Catholic is actually Christian, honest people running the shop.

Read her Op-Ed for the Washington Post, which is a rational and heartfelt call for justice. In this piece she notes that "The Vatican is acting as though it doesn't believe in a God who watches" and writes that Irish Catholics are "in a dysfunctional relationship with an abusive organization."

There are reasons for this. I think that the great Irish writer and journalist Nuala O'Faolain said it best when she wrote:

A lot of us suffered in the Ireland of my day,” she later said. “We came out of a culture where women were utterly powerless and children had no value. If you were hit at school you were hit at home for being hit at school. It goes without saying there was no sex education. The only education a lot of us got was in neglect and being unloved.

I also agree with O'Conner when she says that "Rome...must answer for (their part in this) with a full confession and in a criminal investigation." 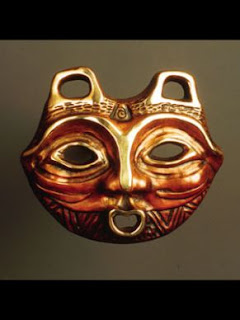 That comment reminded me of the famous Pacific Northwest Native American myth about what it takes to make a good leader titled She Who Watches. It has long been one of my favorite stories. One version of the myth comes from artist Lillian Pitt's website. Ms. Pitt is famous for her masks and other work based on the legends of her people. (2)

There was this village on the Washington side of the Columbia Gorge. And this was long ago when people were not yet real people, and that is when we could talk to the animals.

And so Coyote — the Trickster — came down the river to the village and asked the people if they were living well. And they said "Yes, we are, but you need to talk to our chief, Tsagaglal. She lives up in the hill."

So Coyote pranced up the hill and asked Tsagaglal if she was a good chief or one of those evildoers. She said, "No, my people live well. We have lots of salmon, venison, berries, roots, good houses. Why do you ask?" And Coyote said, "Changes are going to happen. How will you watch over your people?" And so she didn't know.

And it was at that time that Coyote changed her into a rock to watch her people forever.

May we all be good watchers and leaders, and speak out for those who cannot speak for themselves,

(1) Ms O'Connor has led a difficult and troubled life for many reasons, including the fact that she suffers from bi-polar disorder. Her critics have tried to use this to negate her criticism of the church's behavior. It isn't working.

If a group, any group, abuses women and children they can expect to pay a price somewhere down the line. Calling those who tell the truth either crazy or flaky doesn't change the facts. Ms. O'Connor is using her fame to speak out for the children of Ireland, knowing full well that that her personal troubles will be brought up, yet again, in an effort to disprove her arguments. I applaud her for her courage.

(2) She Who Watches, whose Native name is Tsagaglal, is an image created in stone. Unlike most of the rock images found in the region, which are either rock etchings (petroglyphs) or rock paintings (pictographs), She Who Watches is both.

She sits high up on a bluff, overlooking the village of Wishxam, the village where Lillian's great grandmother used to live.

She Who Watches was the first rock image that Lillian ever saw or knew anything about, and it was only because an elder took her to see it. The elder though it would be good for Lillian to learn something of her heritage and of her grandmother's village.

Art: Bronze Mask, She Who Watches, by Lillian Pitt at the NW by NW Gallery

When Is A Sex-positive Practice, Not? by the Rev. Anne Hill

Do You Know What a "Wifey" Is? by Rev. Dr. Aleese Moore-Orbih

Are You Somebody? The Accidental Memoir of a Dublin Woman by Nuala O'Faolain