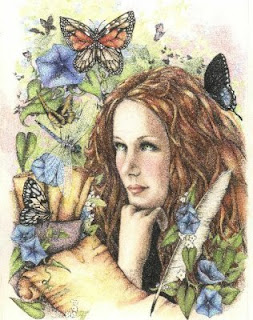 and people wonder why we hoard books.....

The Wild Hunt recently alerted it's readers to an issue in the publishing world that many Pagan feminists had discussed amongst ourselves for some time: books on the women's spirituality movement are now no longer in high (or perhaps any?) demand by publishers. Jason writes:

The wonderful Goddess spirituality blog Medusa Coils points to a recent essay by Starhawk at Alive Mind & Spirit that explores the ever-shrinking mainstream market for “women’s spirituality” book titles, and what that has done to their movement.

“…although you may or may not have noticed, major publishers are no longer terribly interested in books on women’s spirituality. Why? Back in the ‘eighties, HarperSanFrancisco published not just me but a whole lot of great books—Carol Christ, Marija Gimbutas, Z. Budapest, Luisah Teish, Vicki Noble if I’m remembering it all right. They were the books we read, discussed, got excited about and inspired by. Then sometime in the nineties they dropped just about everyone except me—not because the books weren’t selling, but because they weren’t selling enough. They lost interest in publishing for a strong, steady niche, and only really wanted to publish blockbusters for the mass market … it had a debilitating effect on the movement. Without the books to inspire women, without new books to continue the discussions and debate, we lost ground, especially with younger women.”

Starhawk also seems to partially blame the Internet and blogging on this shift, though she hasn’t been shy in utilizing the web to fuel her own activist concerns and capitalist endeavours (one wonders how many new readers she gets from her lofty perch at the Newsweek/Washington Post-backed On Faith blog). It is true that book publishers are increasingly focused on “blockbusters”, but it’s also true that there has been a slow shift in the “New Age” book market away from Pagan/occult material and towards the Oprah-style self-empowerment/improvement genre(s). The industry is in flux, and the Pagan and Goddess-focused authors and small publishers will have to think of new ways to reach their audiences (just as the book Starhawk mentions, “Women of Wisdom”, seems to be doing).

Jason makes some interesting points here about the Internet. I have books by all of these authors in what I think of as my Second Wave Pagan library and, to a greater and lesser, extent, they have informed my path, my organizing work and my writing. That's not to say that I necessarily agree with what they wrote. In some cases these authors gave me someone to argue with with in head, enough so that I was moved to read other writers until I came to my own conclusions. I would recommend that anyone learning about Paganism for the first time have a hungry mind, a respect for historical fact over fiction and be willing to compare, contrast and take whatever they read with a healthy grain of salt. That said, I would be sorry to see some of the better ones go out of print. Will digital libraries save us or does the net's effect on books and book sales mean that fewer good books on these issues can or will be published? The issues addressed by this movement are much broader and deeper then mainstream publishers with their sub genre mindsets can comprehend and this may mean that the work moves not so much underground but down a few rows and a little to the left on store shelves. A new title, cover and blurb and some refocus of language and you have much of the same information repackaged for the new era. So stay tuned. In the meantime, this is tough on Pagan authors who thought they'd finally found a home in the publishing world and harder on new authors who had hoped to add their work to the ones already on the shelves. What is means for readers is that less insightful, inspiring work is being published at a time when Paganism and the Women's Spirituality Movement as a whole has reached a new level of maturity and relevance in an age of global intolerance and change. Good writers need to be supported and nurtured by their publishers (and their readers) so that their work can evolve and grow. We've all seen what happens when hacks write books for a hot market. As things currently stand we may well see some of the best "Pagan" information, not to mention eco-feminist and earthwise authors published under other headings. This could be a good thing in some ways. Not all Pagan authors wanted to be listed in the occult section.

I would not be happy to see the topic of "Women' Spirituality" disappear from our cultural conversation. Some years ago, I was deeply sorry to see women's studies courses which, when I was at school, were powerful, bubbling cauldrons at U.S. campuses; places where women could gather to learn their history, voice their concerns and learn from one other, devolve into mere "gender studies" just because the guys felt left out (and after dominating history and culture for the last 5,000 years who could blame them?). So it goes. That is often what happens when the ideas that cultural creatives espouse finally enter the zeitgeist; what was one radical becomes more accepted. I would note, though, that this wisdom is accepted mostly by academics, feminists, humanists and the more progressive people of faith and only there in mostly comfortable and upscale areas of the blue states. Somewhere out there are a lot of little girls and teenage women who need this information. How will they get it now? I rather think they'll find it in fiction. Women (and good men) writers of fiction have long since embraced these ideas as their own.

If you have some recently titles you'd like to suggest, fiction or non, will you let me know? I'll pass them on.

Perhaps we should make July our very own book month and talk what we're reading, what we'd recommend and why.

Here's to all your reading,

dear Sia, until a few years ago I would have wholeheartedly been with you on the dilution of "women's studies" into "gender studies." But I have a slightly different perspective now and that is because of my son, who despite a deeply conservative streak, has been brave enough to wear a kilt (Utilikilt) for the last five years, beginning at the tender age of 14, in high school, and still at it through recent college years. His longtime girlfriend is very comfortable with her bi-ness (bisexual) and my son sometimes enjoys the ambiguity that a guy wearing a skirt broadcasts. I recently had reason to take him to see two different old Asian doctors who were so flummoxed by a kid in a kilt that they spouted all kinds of sexist comments, which he puts up with all the time. The girlfriend, who used to declare that she was "not a feminist" (regrettably a common refrain among young women) just took the aforementioned gender studies class last quarter and got her consciousness raised (I had a little to do with that too). One of her class assignments was to cross-dress, so she borrowed a kilt from my son and the two of them made the front page in all their sexually ambiguous glory, at the protests following the passage of Prop 8.

My point here is that these options are more available to young people of both genders today, and some young men are taking the challenge of going outside the box. Women paved the way and still do need safe places to learn about their herstory (part of what drove my Moonday School idea), but the men need to learn too. I know, I know, we are in California and it's not like that in most other places, but it's happening here anyway.

Book suggestions with strong, and fully developed female characters from me: The Black Jewels series by Anne Bishop.
The Abhorsen series by Garth Nix (YA)
Kushiel's Legacy series by Jacqueline Carrey
and The Name of the Wind by Patrick Rothfuss.
All good fiction, by great writers.