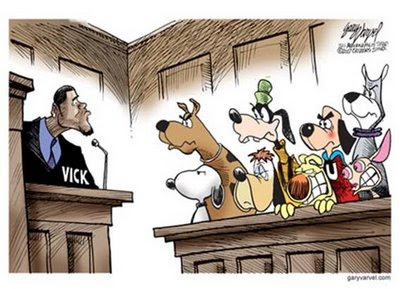 The idea that a man who has just served 23 months in prison for running a dogfighting business... sounds as absurd as John Gotti working with Mother Teresa...But Mr. Vick met twice while he was in prison with Wayne Pacelle, head of the Humane Society, and told him that he wants to help the organization's anti-dogfighting programs.

"My first reaction was, 'You gotta be kidding,' " Mr. Pacelle told us. "But as I set with the issue more, it began to make sense.

"I'm not embracing Michael Vick," he emphasized. "I'm not saying he's a changed man. I'm not saying that we want him reinstated in the NFL. He said, 'I want to work with you on an anti-dogfight program.' And after much deliberation and soul searching, we said, 'here are some programs'."

Warning: Some of the details about animal abuse in this story may not appropriate for sensitive readers.

Can Mr Vic's work make a differerence with young people and others engaged in dog fighting? Let us hope so. Goddess knows he owes a great and heavy karmic debt, as does anyone in his early life who taught him how to dispise, torture and kill other beings for fun and profit.

Mr Simon is an author and the host on Saturdays for the NPR show Weekend Edition. I would also recommend another wonderful story by him that aired today titled Real Men Wear Pink Boxers.

Nineteen-year-old Spc. Zachary Boyd of the 1st Battalion, 26th Infantry, was sleeping when the Taliban attacked his unit in Afghanistan's Kunar province. Boyd leapt from his bunk. He grabbed his weapon, pulled on his helmet and vest, and manned his station behind sandbags at Firebase Restropo. He did not stop to pull on trousers.

What a guy! I love this story.

My thoughts this weekend are with all the real men (and women) serving in our armed forces, both here and abroad.

Think Again: Michael Vic and Modest Dress
Posted by Dj Connell at 10:21 AM

I love the cartoon! Lots of PO'ed dogs in that jury box! :-) I too hope that Vick can help turn around macho attitudes toward dogs.