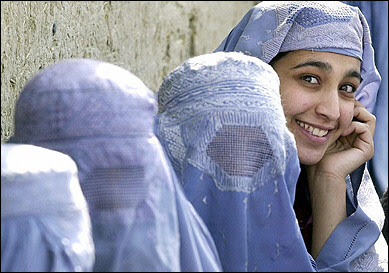 Today, several sources ask us to think again about issues of interest to Pagans: women's equality and animal cruelty.

Ann K. Ream writes about "a fashion trend that pushes anti-feminist values (and) sends a dangerous message to young women" in an article in the L.A. Times titled The False Modesty Movement.

What is it about the growing "modesty movement" that makes me so nervous? On the face of it, there's a lot to like about a girl-driven "revolution" that offers an alternative to the in-your-face fashion popularized by the Britneys and Bratz of the world. When a statement T-shirt can turn a girl from a subject to an object -- "I'm blond. I don't need to be good at math" -- in no time flat, who could argue that a return to sartorial decency is in order?

......One of the most vocal advocates for a return to female modesty is, perhaps not surprisingly, a man. In his book, "Manliness," Harvard University professor Harvey Mansfield argues that women, in demanding equality inside and outside the home, have created a crisis for men.

Her article reminded me of this quip; a tart summation of the advice some men like to give to women:

Be plain in dress, and sober in your diet;
In short, my deary, kiss me and be quiet.
- Lady Montagu
Links - Modesty Movement

Dog Fighting In the U.S. - The Michael Vick case

Jemele Hill of ESPN writes about the Michael Vick case in her letter to young black men titled Bottom Line: Vick Did This To Himself

As the Vick case shows, millions of dollars are little protection if a certain mentality remains. Until now, Vick was considered one of the lucky ones. He rose out of poverty to become one of the most mesmerizing athletes of our time. He went from nothing to millions. He wasn't the American dream, but the American reality. He had the support of a city, of a people and he struck a chord with many young, black men because they saw themselves in him -- rebellious, strong and heroic.

But Vick let you down. He betrayed you. He heightened the stereotypes of black men instead of eroding them. Racists certainly will feast on Vick, but he was the one who made himself an entrée.

Greg Couch of the Chicago Sun Times wonders How Many More Vicks Are There?

The thing that's starting to bother me is this: Exactly how many athletes are into dogfighting?

It's starting to smell like this is not just a Vick thing, but something much bigger. How can anyone possibly be trying to defend this guy, to equate what he did with something in the mainstream?

And why would they?

At one point in this whole Vick mess, Washington Redskins running back Clinton Portis said: ''It's his property, it's his dog. If that's what he wants to do, do it. People should mind their own business.''

PETA is again calling on the NFL to add cruelty to animals—in all its forms—to its personal conduct policy. This case has clearly shown that NFL fans are just as outraged by cruelty to animals as they are by any of the other antisocial behaviors outlined in the policy.

As these recent examples show, the high incidence of animal abuse cases in the NFL indicates a disturbing trend that needs to be addressed immediately: Furthermore, an informant from inside the dogfighting world who spoke on ESPN's Outside the Lines told reporters about "a whole roster of names of professional athletes that we know are involved in dogfighting... I bet not even 10 percent have come to light." Given these disturbing allegations and the numerous recent cases of animal abuse involving NFL players, the NFL needs to act vigorously and with authority to stamp this out immediately.

Update: 8/23 The BBC News has just posted an article on the brutal culture of dog fighting in the U.S. - Warning: This article is not for sensitive readers.

Evidence gathered by animal welfare groups suggests that, despite the fact dog fighting is illegal in all 50 US states, it is both widespread and growing.

An estimated 40,000 people in the US are thought to be involved in "professional" dog fighting, using some 250,000 dogs.....there is evidence to suggest that its growth nationally is related to its adoption as a part of violent street culture.

John Goodwin, an expert on animal fighting for the Humane Society, says one way to track the prevalence of dog fighting is to monitor the number of pit bulls coming into animal rescue shelters.

Whereas 15 years ago 2-3% of the dogs brought in were pit bulls, the breed now makes up 30% of the total nationally and 50% in some areas, he said. One shelter in Mississippi reported taking in 300 pit bulls, of which 60% had scars indicating they had fought.

"Urban areas are where a lot of the growth has been and the shelters get inundated with the castaways from dog fighting," Mr Goodwin ads. "Dog fighting has become popular in gang culture."

A page about Pit Bulls from the Partnership for Animal Welfare

Three Cups of Tea: One Man's Mission to Promote Peace . . . One School at a Time

In 1993, Mortenson was sheltered for seven weeks by the small Pakistani village of Korphe; in return, he promised to build the impoverished town's first school, a project that grew into the Central Asia Institute, which has since constructed more than 50 schools across rural Pakistan and Afghanistan. Mortenson and Relin argue that the United States must fight Islamic extremism in the region through collaborative efforts to alleviate poverty and improve access to education, especially for girls.

The modest movement is nothing new. It will come and go and come again without resolving any real issues.

I think the real problem is that unresolved tensions thirty years ago between the sexual revolution and the women’s liberation movement has led to a rise of raunch culture. The role model for young women aren't the Gloria Steinems; they're the Playmates next door.

The modesty movement is one way to control the female body, but so is raunch culture. In the end, the female body is nothing more than entertainment for the male gaze and a commodity.

Indeed. And I believe this was noted in the link I provided on the Pros and Cons argument - check it out.

As the two feminist writers and I have both noted, the real issue, regardless of whether a society attempts to use us as sex objects or as chattel, is control.

Speaking personally, I would not want any young woman to feel she has to behave like either a Pop Tart or a Door Mat.