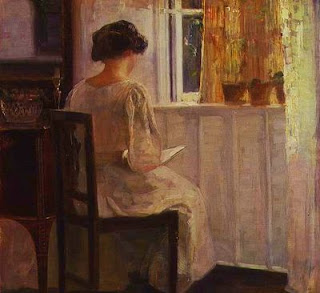 First, the list of winners for the Indies (Independent Bookstores) Choice Awards is up at Bookweb.org: They include:

It is a long and delightful list that offers dozens of titles and authors to consider for your summer reading list - check it out.

I think you might also enjoy this article on poets and the new technology:

The poet's muse is traditionally a goddess with long flowing hair, emblem in hand - but for a new generation of poets the muse is a digital native with WiFi access and an iPod.

Tom Chivers is a 26-year-old poet living in East London who in recent years has found he wants to let technological advances in society influence his writing. His witty contributions to the poetic world are fresh, laugh-out-loud constructions about how technology affects our day-to-day lives.

...As for the bards worrying about technology signalling the loss of words and metaphor by shortening everything into 140 character messages, Chivers said he is positive. He draws on the fact in medieval times monks would shorten Latin words to save space, and he still thinks tech-poetry can arouse deep thoughts.

This week we also saw Amazon learn a painful lesson about censorship, hashtags and Twitter. Meanwhile, Powells Books, another great online book site, (1) took advantage of the great #Amazonfail debacle and declared that "All books are equal".

If you are on Twitter yourself, you can find her at @feliciaday

Need some great book news on a daily basis? Then check out Ron Charles at the Washington Post. His reviews and notes are worth reading. (He is also on Twitter as @roncharles)

Someone You Should Know: Judith Krug

Last but not least by any means, I would like to quote at some length from an article by Rob Boston at Americans United for the Separation of Church and State which mourns the loss of a great lady; a dedicated librarian and activist named Judith Krug. It is titled Religious Right Censor's Worst Nightmare: Judith Krug.

Judith, who ran the American Library Association’s Office for Intellectual Freedom since 1967, was a life-long censorship foe who conceived the now internationally famous “Banned Books Week.” She raised awareness of book censorship in America and devised strategies to combat it.

...Not surprisingly. Judith’s work brought her into conflict with the Religious Right. In 1995, Religious Right activists in Virginia tried to start a new group targeting public libraries. They..,proposed taking all of the books fundamentalist Christians didn’t like – tomes dealing with human sexuality, “the occult,” “non-traditional” families and so on – and isolating them in a special room or getting rid of them entirely.

Judith would have none of that...Censorship was not the answer. Rather, she said, parents should get more involved with their children and make sure the library materials they choose are appropriate.

...A few years ago, when Religious Right activists nationwide went after J.K. Rowling’s popular “Harry Potter” books, Judith again rushed to the ramparts. Judith knew there was something special about a series of books that had captivated even reluctant readers, and she was not going to let the Religious Right take them away from children. The anti-Potter campaign soon collapsed under the weight of its own silliness.

...Judith helped me understand that despite our hallowed First Amendment, book censorship has a long lineage in America. For many years even in the 20th century, “Societies for the Suppression of Vice” worked in concert with conservative religious groups to attack material deemed “blasphemous” or “sacrilegious.” The books attacked were in no way pornographic; in fact, many are today considered classics. Yet book store owners could be criminally prosecuted for selling them.

The author goes on to say that a good way to remember Judith would be to read a banned book this week. I heartily concure.

(1) The fabulous Powell's Bookstore is located in my beloved Portland. The stores (and there are several, including their three story flagship store in the beautiful Pearl Disctict) are a "must see" if you come to this part of the Pacific Northwest.

I recently wrote this in response to a Mother's Jones article titled What's Wrong With Independent Bookstores? :

Everything you could possible want in a bookstore (new and used) you can find at Powell's Books in Portland, OR. It is a local landmark and the company as a whole is a good citizen.

Whenever we have book loving visitors, we take them to Powell's Books. Whenever someone new moves here, we tell them to take a sandwich, a compass and a whistle and go to Powell's, AKA The City of Books. The place is clean, well lit, and well organized and it's in a lovely, walkable part of Portland. There are places to sit all over their muti-storied building, and a cafe. The staff are friendly, and helpful and know what they are talking about. Their selection is both deep and wide. www.powells.com.

Their biggest store is downtown but they have other stores all over the metro area and in the airport. I moved here, in part, because of Powell's. It's part of what makes Portland one of the most livable, interesting and civilized cities in the U.S.

Art: Carl Vilhelm Holsoe's Girl Reading At a Sunlit Window found at the Books Do Furnish A Room blog
Posted by Dj Connell at 10:24 AM