National Women's History Month: Taking the Lead To Save Our Planet

Today's post goes out in honor of Women's National History Month. The theme this year is Taking the lead to save our planet. The Women's History Project has an inspiring list of honorees on their website. The woman featured on the top of the list is a person heroine of mine, biologist and writer Rachel Carson. President Obama mentioned several great women in his proclamation, including Ms. Carson.

Ellen Swallow Richards is known to have been the first woman in the United States to be accepted at a scientific school. She graduated from the Massachusetts Institute of Technology in 1873 and went on to become a prominent chemist. In 1887, she conducted a survey of water quality in Massachusetts. This study, the first of its kind in America, led to the Nation's first state water-quality standards.

Women have also taken the lead throughout our history in preserving our natural environment. In 1900, Maria Sanford led the Minnesota Federation of Women's Groups in their efforts to protect forestland near the Mississippi River, which eventually became the Chippewa National Forest, the first Congressionally mandated national forest. Marjory Stoneman Douglas dedicated her life to protecting and restoring the Florida Everglades. Her book, The Everglades: Rivers of Grass, published in 1947, led to the preservation of the Everglades as a National Park. She was awarded the Presidential Medal of Freedom in 1993.

Rachel Carson brought even greater attention to the environment by exposing the dangers of certain pesticides to the environment and to human health. Her landmark 1962 book, Silent Spring, was fiercely criticized for its unconventional perspective. As early as 1963,however, President Kennedy acknowledged its importance and appointed a panel to investigate the book's findings. Silent Spring has emerged as a seminal work in environmental studies. Carson was awarded the Presidential Medal of Freedom posthumously in 1980.

Grace Thorpe, another leading environmental advocate, also connected environmental protection with human well-being by emphasizing the vulnerability of certain populations to environmental hazards. In 1992, she launched a successful campaign to organize Native Americans to oppose the storage of nuclear waste on their reservations, which she said contradicted Native American principles of stewardship of the earth. She also proposed that America invest in alternative energy sources such as hydroelectricity, solar power, and wind power.

These women helped protect our environment and our people while challenging the status quo and breaking social barriers. Their achievements inspired generations of American women and men not only to save our planet, but also to overcome obstacles and pursue their interests and talents. They join a long and proud history of American women leaders, and this month we honor the contributions of all women to our Nation.

The Family Education website offers a timeline, a quiz and a list of activies you can do with your children. Check it out.
Women Know Stuff: 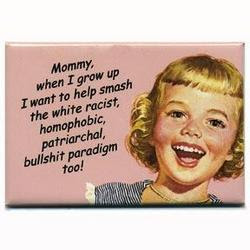 Men explain things to me, and other women, whether or not they know what they're talking about. Some men.

Every woman knows what I'm talking about. It's the presumption that makes it hard, at times, for any woman in any field; that keeps women from speaking up and from being heard when they dare; that crushes young women into silence by indicating, the way harassment on the street does, that this is not their world. It trains us in self-doubt and self-limitation just as it exercises men's unsupported overconfidence.

The battle with Men Who Explain Things has trampled down many women -- of my generation, of the up-and-coming generation we need so badly, here and in Pakistan and Bolivia and Java, not to speak of the countless women who came before me and were not allowed into the laboratory, or the library, or the conversation, or the revolution, or even the category called human.

....Most women fight wars on two fronts, one for whatever the putative topic is and one simply for the right to speak, to have ideas, to be acknowledged to be in possession of facts and truths, to have value, to be a human being. Things have certainly gotten better, but this war won't end in my lifetime. I'm still fighting it, for myself certainly, but also for all those younger women who have something to say, in the hope that they will get to say it.

Loved it. Love Them. Thank you, ladies, for showing us all what's possible, and a hug to all the men - Yes, Virginia, they do exist, just ask Michelle Obama - who listen, who love us and who treat us like equals.

Lest I Get Too Giddy:

Funding Restored to the U.S. Populations Fund by President Obama

Hat tip to Echidne of the Snakes for the links to both these articles, and my special thanks for her wonderful story about the rescue of Deacon the dog. E. you made my day.

I think this is a very good move by Woman's History Project.We've got to be united to save earth! Earth Hour is practiced at large scale in all developed and developing countries but there has been more publicity and awareness this year, as well as participation from large corporations like http://www.commit21.com/ which is a good sign - that there is still hope and that people still care!