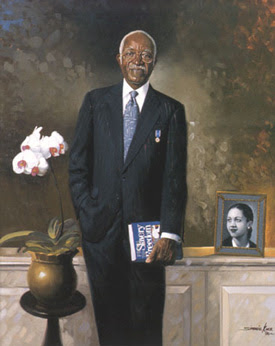 I am happy that he lived long enough to see the inauguration of President Obama.

(Update 11:52) Scott Simon of NPR posted a personal remembrance. You can read it here.

John Hope Franklin, a towering scholar and pioneer of African-American studies who wrote the seminal text on the black experience in the U.S. and worked on the landmark Supreme Court case that outlawed public school segregation, died Wednesday. He was 94.

David Jarmul, a spokesman at Duke University, where Franklin taught for a decade and was professor emeritus of history, said he died of congestive heart failure at the school's hospital in Durham.

Born and raised in an all-black community in Oklahoma where he was often subjected to humiliating racism, Franklin was later instrumental in bringing down the legal and historical validations of such a world.

As an author, his book "From Slavery to Freedom" was a landmark integration of black history into American history that remains relevant more than 60 years after being published. As a scholar, his research helped Thurgood Marshall and his team at the NAACP win Brown v. Board of Education, the 1954 case that barred the doctrine of "separate but equal" in the nation's public schools.

If you'd like to learn more, I recommend visiting this memorial page from Duke University: John Hope Franklin

May the Goddess guard him. May he find his way to the Summerlands. May his friends and family know peace.