For the Birds: February Is National Wild Bird Feeding Month 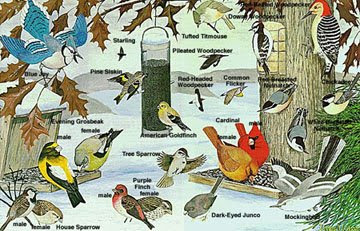 Many ancient fertility festivals are related to the fact that during this time of year birds all around the world build their nests and look for a mate. (1) Today we still celebrate our connection to the vital life of birds, albeit in a slight different form.

Birders Magazine reminds us that February is National Wild Bird Feeding Month. Established in 1994, this celebration is now 12 years old and has over 54 million participants.

Here is a Bird Feeding Chart for North American birds which tells you which seeds and suets to feed the birds in your area.

Also, check out the National Audubon Society webpages, including the page called Bird Feeding Basics which has helpful information on choosing and placing your feeders.

This observance was established because wintertime is one of the most difficult periods in much of North America for birds to survive in the wild.

Consider that:
- A typical backyard bird doesn't weigh as much as two nickels.
- Birds spend most of their waking hours searching for food -- without the help of "hands" and "fingers".
- They may consume 15% of their body weight overnight just keeping warm enough to survive.
- Like mail carriers, they're outside in sleet, snow, wind and cold. 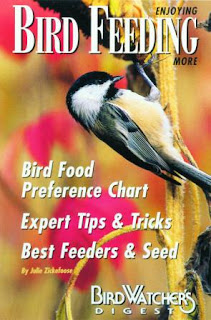 It's import to feed birds responsibly, so I would also recommend reading my earlier post titled Feeding Wildlife in Winter

The Bird Feeding Society reminds us that:

In nature we often find connections to our inner selves: our place in the world; our human victories and shortcomings; our challenges and inspirations and, very often, our responsibilities.

Over the last half-century of urbanization, people have gradually missed out on lessons nature may teach us. Lifestyle changes and loss of local habitat often separate us from the natural world. Television takes us to places once only explored on foot. Thankfully, there is still a nature activity still available to everyone and that's feeding and watching wild birds. Backyard birds may be the only wildlife many people see any more. The ability of wild birds to fly, their intrinsic beauty feed the imagination and their accessibility makes wild birds a perfect teacher and reminder about vanishing habitat and our responsibility to preserve it..

Need some springtime inspiration? Then head over to Voices in the Wilderness at flickr and check out their bird photo mosiac. It will bring a song to your heart.

Painting: Winter Birds. Click here to find information on the birds featured in this painting.

Festivals in ancient Greece and Rome were often held to honor nature dieties such as Faunus. Faunus (AKA Pan) is a woodland deity, a protector of herbs, crops and shepherds. His female counterpart is Bona Dea, also known as Fauna.

Fertility festivals in early spring timed to the mating of local birds and the return of migrating species; both events were a signal for our ancestors of the return of light and warmth. In such festivals you will often find reference (in some form or another) to the Goddess Flora and her sister, Fauna, both of whom are closely associated with bird life, fertility and the earth. Our modern phrase "flora and fauna" harks back to both goddesses and refers to plants and wildlife found in a given region.

Everywhere on the net, you can find this note:

During the Middle Ages, it was commonly believed in France and England that birds mating season began from February 14. This popular notion added to the idea that the middle of the February celebration of Valentine's Day be celebrated as a day of love and romance. Fourteenth and fifteenth centuries English and French poets and litterateurs through their romantic verses further promoted the concept of linking Valentine's day with romantic love.

Keep in mind, that prior to the Christian calendar changes in the middle ages, Feb 14th would be 11 days later in time, and so a bit warmer and welcoming for birds in Europe.
Posted by Dj Connell at 9:59 AM

One v easy thing that I do is to save yarn scraps, those two or three inches that I cut off after weaving the intarsia threads into the sweater or after sewing up the seam on the warm stocking cap. I'd otherwise throw them away. In the Spring, I spread these gifts from the lambs and mohairs and silk worms out for the birds. I get such a kick out of walking underneath nests that have a strand of G/Son's sweater woven in among the sticks, making things soft and warm for the baby morning doves.

My partner loves feeding the birds, something I was never all that interested in, but it's helped me learn so much about the visitors to my own back yard. Now it's something I look forward to year-round.

I have a bird book by my window feeder so I can identify who comes and goes, and I leave out drying lint for them and hair from my hair brush to use when they build their nests in spring time. They give so much to us - it's nice to give a bit back to them.