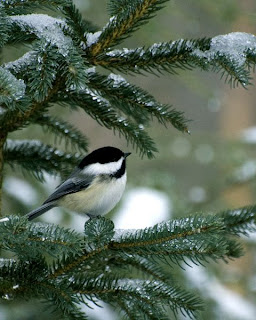 By now, most of our song birds have flown south. The Canada geese cross the sky, coming and going in great flocks, calling to one another as they fly under red and pink clouds at sunset, and leaving those of us rooted here on the ground gazing up in wonder. Last night Long Moon rose clear and bright, promising frost and firece winds to come. Here on our mountain the snow is late in arriving but a winter storm is dancing offshore, and she's bringing the party to us. Now, we wait. (1)

As the cold and dark increase, I change my seed and put up different kinds of feeders, especially suet, keeping in mind that there is a right way and a wrong way to feed wildlife in winter:

In its handbook Wild Neighbors: The Humane Approach to Living with Wildlife, the Humane Society of the United States (HSUS) notes that the question of feeding wildlife has curious wrinkles. A multimillion-dollar industry surrounds the feeding of wild birds, for instance, even as many cities prohibit the feeding of pigeons, ducks, and geese, animals that thrive in the presence of humans and their castoff food. The HSUS offers a broad criterion for deciding what animals to feed: “Wild animals,” it warns, “should not be fed when the consequence of feeding could cause them harm.”

That harm can be of many sorts. When confined to a single food source such as a feeding station, congregating animals are susceptible to disease just as humans are in close quarters; moldy and wet food can also cause illness. HSUS guidelines recommend that feeders for ground-feeding birds be rinsed every two days in a 5–10 percent solution of chlorine bleach and warm water for two or three minutes and then scrubbed clean.

Climate change is changing the migration of birds all over the world, including Oregon where we live.

Just outside of Portland is a wonderful haven for geese and other waterfowl and we take great delight in visiting these. Some of these birds have not been seen here in years past:

As the weather has cooled and the days shortened, many birds that nest in Oregon and Washington have moved on.

Warblers, tanagers, flycatchers, and other insect-eating birds are now in Central and South America. The concept of birds flying south for the winter is a familiar one but for many birds that nest in the high arctic, the Pacific Northwest IS south. With the arrival of cooler, wetter days come approximately 250,000 geese that spend the winter months in the Willamette Valley.

While the area has always hosted wintering populations of geese, in recent decades many birds that used to winter in central California have shifted their range northward into the Willamette Valley. Large flocks of geese can be found in fields, wetlands, and urban duck ponds from October through April, providing fun viewing for wildlife watchers and hardcore birders alike.

The vast majority of birds in the winter flocks are Cackling Geese, followed in abundance by Canada Geese, Snow Geese, Greater White-fronted Geese, and the occasional Ross’s Goose, Brant, and Emperor Goose.

Meanwhile, naturalists are asking, "Why are the squirrels starving from lack of acorns?"

For parents and teachers:

Information on the Canada goose, with worksheets and coloring pages from KidZone.

(1) As urban folks, we've had a steep learning curve when it comes to living here in real weather, but our neighbors give us good advice. We've added extra blankets in the igloos for the feral cats we have not yet trapped and re-homed as barn cats. We put on the snow tires on the four-wheel drive, and hauled out the Columbia coats; after two winters here I now a big fan of those coats. The winter boots are waiting in the mud room and we have candles and food and enough supplies to last a week without power at need. Our home is as ready and warm as we can make it.